Waltz With Bashir's Director on War, Animation, Memory, and the Subconscious

From the very beginning, Israeli director Ari Folman’s animated documentary Waltz With Bashir plays like a nightmare come to life: Folman talks to a fellow veteran haunted by dreams of vicious dogs. Speaking with his friends, the director tries to recall his lost memories of a massacre of Palestinian refugees during Lebanon’s civil war, committed by Lebanese Christians but enabled by the Israeli military. He embraces the ambiguity of animation, mixing past and present, memory and dreams. Waltz With Bashir uses relatively conventional interview footage much of the time, but its flashbacks would be impossible to stage without extensive recreations. While such an approach risks aestheticizing violence, Folman avoids this pitfall. His film’s final five minutes are among recent cinema’s most devastating, cutting from his animated recollections to grainy video footage of screaming widows and rotting corpses. For all its flights of fancy, reality eventually comes back with a vengeance.

FILM  & VIDEO: Had you ever worked with animation before making Waltz With Bashir?

Folman: Yeah, I made a documentary series called The Material That Love is Made Of. It was a 5-hour series, with 5 episodes. Each episode opened with 5 minutes of animated documentary, with scientists talking about scientific aspects behind love.

F&V: Was all the animation in Waltz With Bashir hand-drawn?

Folman: Of course! More than 3,000 frames were drawn. Then they were moved with cutout animation, 3-D animation and a little bit of classic, frame-by-frame animation.

F&V: Would you ever work with computer graphics?

Folman: In the future, yes. I might use it on my next project. I have to figure out how to do the animation for my next film. It’s going to be an adaptation of Stanilslas Lem’s novel The Futurological Congress. I don’t know exactly what kind of techniques we’re going to use. It depends o the budget. Everything’s open, right now.

F&V: Has Waltz With Bashir been shown in Lebanon?

Folman: We were really hoping it would happen. The Belgian distributor has pretty good connections in Lebanon. Her husband is Lebanese. It seems really complicated with Hezbollah now. We might just spread around screener DVDs.

F&V: What led you to decide to make an animated documentary about your memories?

Folman: I thought that animation is the only way to tell this story, with memories, lost memories, dreams and the subconscious. If you want to feel any freedom as a filmmaker to go from one dimension to another, I thought the best way to do it was animation. 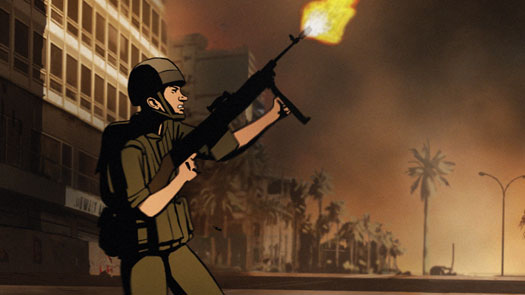 F&V: Were you inspired by any other films about war?

Folman: I was inspired mainly by books that I read in my twenties and earlier. They were all written by people who participated in war, then grew up and took a step backwards and looked it in a funny, ironic way. Of course, Catch-22 and Slaughterhouse Five. The Adventures of Wesley Jackson by William Saroyan. It’s not a book, of course, but M*A*S*H. All these things show war without any glory, bravery or brotherhood of men. In my opinion, those qualities get focused on for the wrong reasons.

F&V: Several of your interview subjects say they got through war by acting like they were watching a movie. Did that influence your approach?

Folman: Definitely. War is like a very bad acid trip, if you’ve ever experienced it. I wanted the audience to go through this experience in a dimension that you don’t know. It’s completely different from your everyday life. The design of the animation is intended to produce this effect. From the very opening, when you see dogs running through the streets of Tel Aviv, you’re in this very unpleasant hallucination. Then it goes deeper and deeper until it reaches the documentary footage of the massacre.

F&V: Was it always your intent to end the film with that video footage?

Folman: Yes. I didn’t want anyone to leave the theater thinking “This is a very cool animated movie with great drawings and music.” I wanted people to understand this really happened. Thousands of people died that weekend. Most of them were kids, unprotected women and old people. It puts the whole film into proportion and perspective. I felt I had to do it. It seems longer than it is. It’s only 50 seconds.

F&V: Did your work for TV, including the original version of the HBO show In Treatment, have any impact on your return to filmmaking?

Folman: I’ve worked for both film and TV since graduating film school. My main profession is writing. I like writing for TV if the material’s good. I can stay at home all the time, in front of my computer. I like the fact that whatever I write is not up to me to direct. If I include a scene with a car crash, I don’t have to film it.

F&V: Were you surprised by some of the negative reactions Waltz With Bashir received from leftists in Israel?

Folman: I was surprised I didn’t get any reaction from the right-wing. It was really welcomed. It was adopted very warmly by everybody, but the extreme left. I can understand what they’re saying. but I don’t agree with it.

F&V: How closely does the film follow your real process of recovering memories of the war?

Folman: It’s pretty close, but you have to understand that there were 2 stages of filmmaking. There was the stage of gaining back my memory, which was the first step: making research, meeting people, writing the script, doing interviews. Then when we started working on the animation – each part took 2 years – and raising money, I was no longer concerned about memory or the therapeutic process. I was worrying about art and financial problems.

F&V: What was your biggest challenge?

Folman: The biggest challenge was just making it happen. Making this kind of film, which is unique and different, in a world where film genres are rigidly categorized. It’s really difficult to make a breakthrough in terms of raising funds and approaching TV stations. If you come with something new, it always threatens people. They fear for their jobs. I don’t know why. 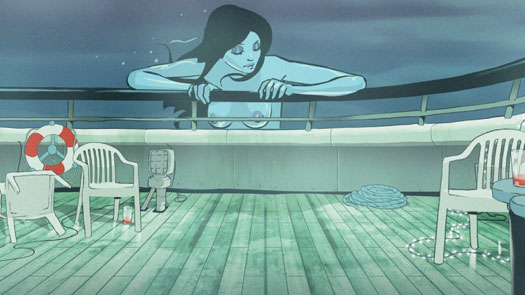 F&V: Did you have a hard time balancing a larger historical perspective with your own story?

Folman: I was not at all concerned with the larger historical perspective. I made a very personal film. I had no general statement. If there is one, it will be made by people who see the film. Taking a statement from a private story and finding a universal message has nothing to do with me. It’s up to film critics and the audience to define the film.

F&V: I liked your use of Ã¢Â€Â˜80s pop music. Were OMD’s “Enola Gay” and Public Image Ltd.’s “This Is Not a Love Song” favorite songs of yours from the period?

Folman: I’m not an Ã¢Â€Â˜80s fan. My musical education is stuck in the mid Ã¢Â€Â˜70s. My editor grew up in the Ã¢Â€Â˜80s and brought a lot of music in. I’m totally disconnected from the music of this period. Rock music is done for me by the late Ã¢Â€Â˜70s. I like Bob Dylan’s Blood on the Tracks, Pink Floyd’s Animals, Roxy Music and T. Rex. After that, I neglected rock’n’roll and started listening to jazz. Now I only listen to free jazz and classical music.