While many filmmakers are just now discovering 3D, France’s Mantello brothers have been shooting stereoscopically and underwater since 1992. Francois and Jean-Jacques Mantello began their 18-year 3D ocean odyssey with Miracle Mermaid, which won the 1992 Palme d’Or du Public (Gold Award) at the 25th World Festival of Underwater Pictures in Antibes, France. Most recently, they produced the IMAX films, Sharks 3D and Dolphins and Whales 3D. The brothers are the co-writers and producers of the upcoming OceanWorld 3D, which will be released in the U.S. this fall through Disneynature, the Walt Disney Studios documentary arm that produced Earth. Introduced by Jean-Michel Cousteau and produced by the Mantello’s 3D Entertainment and McKinney Underwater Productions, it is the narrated tale of a sea turtle migrating through the earth’s richly populated oceans.
The film, shot with seven underwater stereoscopic cameras by underwater DP Gavin McKinney and directed by Jean-Jacques Mantello, is the result of six years of production, 25 expeditions and 200 hours of 3D footage. After premiering at Cannes and the Berlin Film Festival last year, it has been sold to 51 countries and is already in release in the UK, France, Spain, Russia, Greece and Malaysia. Each country typically remasters its own narration. In the French version, Oscar-winner Marion Cotillard narrates. Disney has not yet announced the American actress who will narrate the U.S. version.

We caught up with Jean-Jacques Mantello in a rare moment when he was on dry land.

You design your own underwater housing. How many different casings did you use on this production?
Seven. We’ve been shooting this movie since 2001, so we’ve designed about ten different ones over the years. We had to go through different cameras and different situations. The first housing was about 300 pounds, for example. It was huge, and you cannot jump from a boat with such big housing, so you need a crane to go into the water. Not a very simple or quiet undertaking, so you can’t approach whales, for example. Each year, we experimented with different housing, finally succeeding with a camera housing that was 150 pounds, half the weight of that original. We were finally able to jump from a boat when we needed to, and could approach the big animals. We could also travel in smaller boats, which let us head into very remote areas. This gave us access to some sea life that has not been filmed in 3D before.

How did you get that weight in the housing down specifically?
We started by removing parts of the camera that you could do without, like handles, and downsizing the viewfinder, power system, etc. We also made sure that the housing was as close in size to the original camera so we didn’t create any extra pockets of unused space. 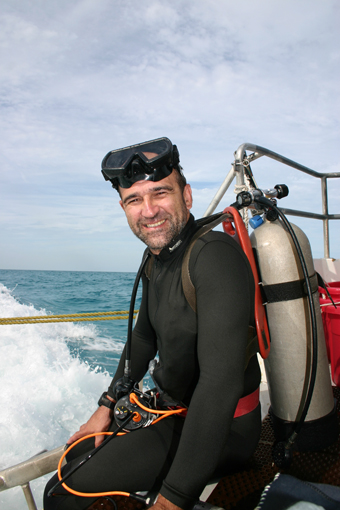 What cameras have you worked with over the years?
We started with Sony’s HDCAM F900 and then moved to the HDW-750. We’ve stuck with these cameras because they are incredibly reliable (and we knew all about them; we started out in France as Sony equipment dealers). When you are on boats, which are shaky, and there are all kinds of humid and wet conditions, it creates a very extreme environment for any camera. With the Sony cameras, we knew that no matter what, when we started them, they would start. And when there are two in the housing, the temperature increases significantly. Since we’re shooting in stereoscopic 3D, we needed strong equipment that wouldn’t fail, period. We also knew that the Sony cameras would travel well, not just on a boat or in the water, but between locations via land or air. If we did have a problem, we knew we could find a dealer in any corner of the world we happened to be in who could help us fix our problem. 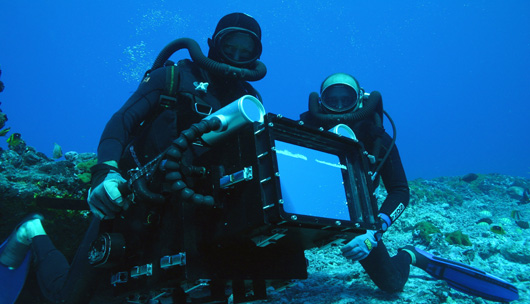 When did you create your first stereo 3D rig?
We’ve been working in 3D since 1992, when nobody else was doing it. In fact, that first one was also an underwater shoot. We were shooting with Betacam SP. We were about the only ones in the world doing 3D movies back then, and many of our clients were actually corporations, like HP. When we wanted to show these movies, we had to create our own projection systems. We cobbled together two Sony projectors and connected two Betacam decks to them.

Your more recent films were shot specifically for IMAX. How did that change your normal shooting style?
Well, in the past, when you set out to make an IMAX film, there was a kind of bible, created by IMAX, that outlined how you should and shouldn’t shoot your film. Our first IMAX movie, in 2001, we followed that bible to the letter because we weren’t sure what we would end up with if we didn’t. In fact, we found out that all those restrictions were not unbreakable, and we soon discovered, through experimentation, that we could do everything we wanted. As an example, the IMAX bible said you should avoid big close-ups or fast-moving pans, which of course is an excellent rule if you want to avoid strobing. But we found that you can do it, up to a point. We found that you can very nearly shoot for IMAX as you would for normal cinema. The limitation comes more on the 3D side, and there are just certain 2D shots you can’t get in 3D. Our latest film will also screen in theaters with RealD projection, so we aren’t thinking about one specific display format when we shoot. 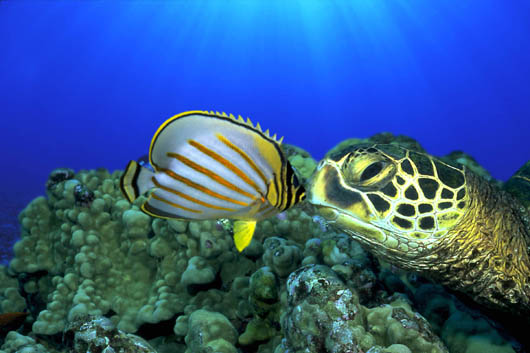 The film’s star, a migrating turtle, considers a fellow traveler.

What was the most challenging aspect of capturing the footage in this film?
The most difficult, actually, had to do with our “talent”—sometimes it was just very, very difficult to find the underwater animals. Technically speaking, every aspect of shooting 3D underwater is challenging. Only ten years ago, to put two cameras in an underwater housing was not so simple. Nothing existed and we had to design everything from the ground up. We continue to want to create the perfect housing, and that changes with each new camera design. On the post side, it’s been a challenging past several years. When we started, nothing existed off-the-shelf for 3D post. Often, we adapted software to meet our needs. That’s why we still do all our post in-house, because we created a system that works and we’re constantly evolving it. And back in 2001, I believe we were the only facility who could even handle 3D in post.

Which off-the-shelf tools have you used to edit, color correct and composite your films?
We used Premiere for many years, and then Final Cut, but we just recently moved to Sony Vegas. From our experience, Premiere just couldn’t handle a one-hour program in such high-resolution, let alone 3D. I was really surprised with the 64-bit version of Vegas, which we started testing back in June. Even though it’s only in Windows, it has a really elegant interface. But more important, it never crashed when we were working in 4K. This was just stunning to me—it’s the first time in my life that an editing program doesn’t crash, even with heavy, hi-res files. We’re still using After Effects, and I can’t wait, of course, for a 64-bit version of that.

We’ve also ended up creating a set of proprietary plug-ins to edit directly in 3D. We always start editing on the small screen, but we always end up editing on a projection system, because we have to make sure that the resulting 3D shot won’t strain the viewers’ eyes.

Have you tried using any of the more recent 3D codecs, such as Cineform?
Yes, I like working with Cineform very much, especially since we are working in 4K. 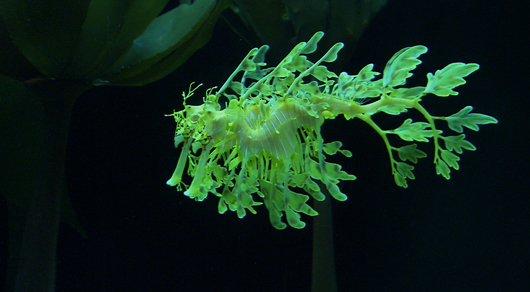 One of the deep’s more unique creatures, Phycodurus eques, or leafy sea dragon, is a
variety of seahorse.

When you direct, are you always in the water with your DP, Gavin McKinney?
Oh yes, all the time. I know, it’s not often that the director is right there with the DP. But we are so used to it. My brother and I have been diving since we were very young. The first time you are in the water and you see a shark, you get out of the water as fast as you can. But after you spend hundreds and hundreds of hours with those animals, you understand that there is no real danger there. Actually, with about four species of shark, it’s more dangerous to be a swimmer at the surface than to be diving with them. It often will take swimmers, who are beating about the surface of the water, for a wounded animal, so it makes the mistake to eat what it thinks is helpless and dying. Honestly, we’ve had more danger with our cook on the boat than we did with the sharks in the water!

How do you get those shots you know will play well in 3D, especially in a wild, unpredictable environment?
Well, sometimes you can set up things, with smaller animals, that you know when you shoot it that it will turn out well in 3D. When you work with whales, however, it’s very difficult to predict. If you know, for example, that you want to get the tail coming up out of the water, you know you have to dive behind the whale, while he is sleeping. Sometimes, it’s mostly luck and chance. Then again, there are shots in the film that may look like lucky shots but which we got from persistence, from patiently and quietly spending a very long time in the water with the animal. Sometimes, we can dive in one spot for a month and get nothing, and other times, we’ll take one dive and get a hundred lucky shots. That’s what live shooting, especially underwater, is all about. 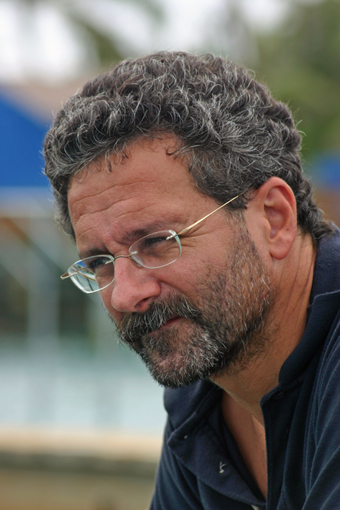 How many divers on your team go under on any given shoot?
We try to keep it simple, especially because the more divers you have underwater, the bigger chance you will see their bubbles ending up in the frame. Sometimes, it is just me and Gavin; sometimes three of us.

Do the divers themselves ever appear in any of your films?
Every film we have done we are 100 percent under water and you never see any humans. For me, humans are just invited underwater; we don’t live there. I didn’t want to see any divers, shown as heroes in the middle of the shot. The thing is, in 3D you really feel like you are in the movie. We just wanted to bring the audience underwater with us and make them feel like they had just made a dive. The first time Jean-Michel Cousteau saw our footage, he said, ‘Wow. It was as if I had been diving. It feels exactly like that.’ And with the film, we hope you’ll see species that you could dive all your life and still never see. That’s why even divers like to see our movies. Let’s face it: no one is going to take you to dive with white sharks. 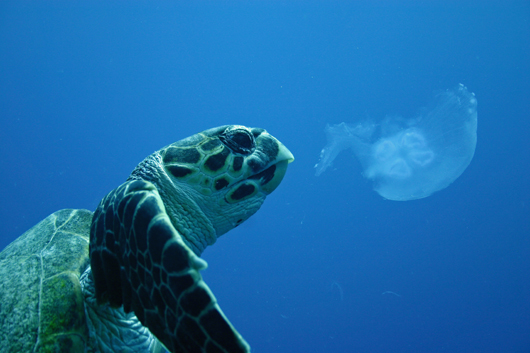