As an exclusive to Studio/monthly readers, download the HD clips featured in this tutorial from Artbeats for free.

Motion design in After Effects can be as complex or simple as you desire—that’s down to your own design aesthetics and execution, and of course, the project at hand. Whether you need thousands of intricate layers forming rich and beautiful tapestries of color and detail, or a handful of elements creating bold and striking images, a few simple tips and tricks in After Effects can help you achieve the desired look and feel. The complexity… well, that’s up to you. This tutorial, created to showcase a number of new clips from Artbeats, will show you some of the techniques we used here in the Energi Design studio on a recent title design for a foreign documentary called L’automne à Paris.

To download the Artbeats clips used in this tutorial (approximately a 907 MB zipped file, so plan accordingly), click here.

I started by importing a Photoshop graphic containing a single layer of some foreground grass which had been separated from its background using Select > Color Range within Photoshop. Dropping this into the timeline in After Effects at 0 seconds, the transparency was automatically recognized.I first applied Effect > Stylize > Posterize, and set the value to 3 to isolate just the highlights, mid-tones and shadows of the grass. Then I added Effect > Color Correction > CC Toner, which lets you apply three specific colors to those areas (hence the reason we posterized down first).

Next, I set the color swatches to three tones of green, as you can see. Although the overall color scheme would change by the end of the project, setting the three tones at this point helped isolate the simple areas of color in the grass, which was the aim of the overall design. 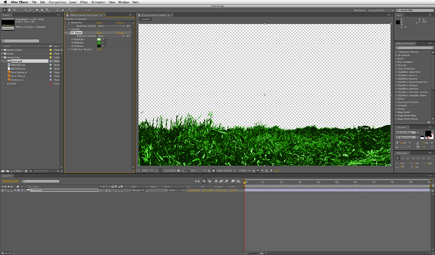 I then imported a beautiful HD sky clip from Artbeats, namely WC101H from their White Puffy Clouds HD collection, and dropped that into the timeline below the grass. As the clip was full 1920×1080 HD, I hit Option-Cmd-F (Alt-Ctrl-F) to quickly scale it down to fit my 1280×720 comp, effectively increasing the detail and quality. The time lapse of the clouds was a little slow for my liking (25 seconds in length), so I hit the {} icon in the timeline to reveal the Time Stretch options, and changed the Stretch value to 50% to speed it up. I then needed to adjust the color—indeed, the number of colors—in the sky, to be crushed and linear like the grass, but to also aid in keying it out. First I applied Effect > Color Correction > Brightness & Contrast, and tweaked the Brightness up to around 60%. Then I applied Effect > Stylize > Posterize again, and this time set the level to just 2, basically isolating the white clouds moving against a single color sky (for this tutorial, I soloed the clouds layer to make it easier to see all of the image). This did leave a few stray colors and pixels around the edge of the clouds as they moved, but those were easy to fix. 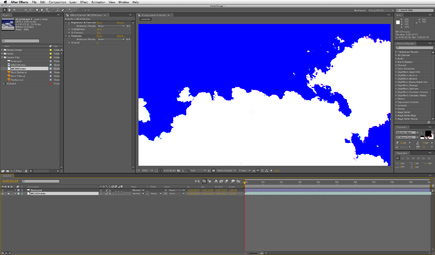 Step 4 Create Alpha Matte, Choke It and Fill it!

Next, I used these effects to help create a perfect alpha channel of the clouds so they could be composited over any other layer in the future. First, I went to Effect > Channel > Shift Channels, and set Take Alpha From to Green (Red would also have done the trick in this instance), which removed the background blue and left the clouds on a transparent background, albeit with some residue edge pixels. So, I then added Effect > Matte > Matte Choker, with a Geometric Softness of 3 and Choke 1 left at 75%, which cleaned those edges up perfectly. To add one clean splash of white paint across the whole cut-out layer, I added Effect > Generate > Fill, and set it to white. 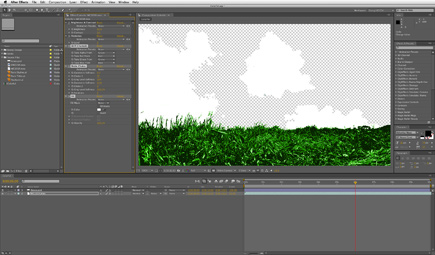 Now, in the absence of the original blue sky from the video clip, I was free to add a new, smooth gradient sky in the background. At 0 seconds in the timeline, I went to Layer > New > Solid, clicked Make Comp Size, named it Sky Solid, and clicked OK (the color of the solid didn’t matter), making sure to drag it below the grass and sky layers in the timeline to be the back-most object. Then, I went to Layer > Layer Styles > Gradient Overlay, twirled down the options in the timeline until I could see Edit Gradient, then clicked that and adjusted the start end end point colors of the gradient to form a clean dark-to-light blue sky. 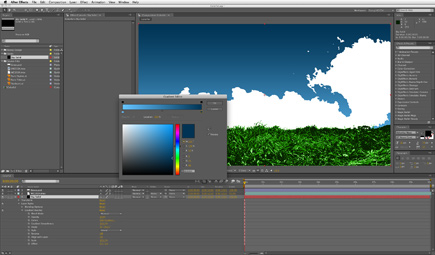 Now that the sky and grass were in place, I imported an Illustrator graphic containing a very detailed illustration of the Paris “skyline,” albeit not geographically correct, of course! But stylistically, it suited the design perfectly. After I dropped the skyline into the timeline below the grass but above the clouds and sky, I noticed that its black fill was quite harsh. So I added Effect > Generate > Fill, and set it to white again, and then went to Layer > Layer Effects > Drop Shadow to add a shadow just light enough to separate it from the clouds moving behind. I changed the Opacity to 30%, the Distance to 0° (there’s no “light source” in such a situation), and the size to 40px. 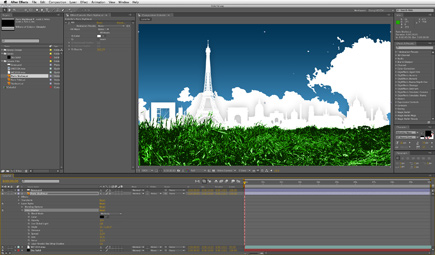 I then imported the Illustrator file containing the main title graphics, the typography for which I designed using P22 Dearest Swash from Veer’s type library, and also Neutraface Display Titling from the wonderful folks at House Industries. After dropping it into the timeline I once again replaced its black fill for white using the Fill effect. Then, I applied the Drop Shadow layer style to the titles layer, and set the Opacity to 60% and Size to 20px (with the Distance once again at 0). 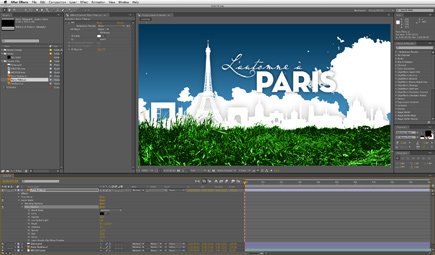 To add some more stylistic movement into the sky, I imported a new graphic element of a series of white streaks emanating from a central point, and placed that into the center of the design, once again above the sky elements, but below all the other layers. In the timeline, under the Modes section, I changed its blending mode to Overlay, then hit T to show the layer’s Opacity value, and dropped that down to 40%. Then I hit R to show the Rotation property, and clicked the stopwatch to apply a keyframe at 0 seconds. I then jumped to the end of the timeline and adjusted the rotation to +30°, so across 10 seconds there was now a nice slow spinning of those streaks in the background. My final motion element to add was another great HD clip from Artbeats. I chose a slow-motion clip of some falling leaves on a green screen background, UM231H from the Ultra Motion 2 HD collection. I sped up the rate at which they fell by adjusting the Time Stretch to 50%, same as the clouds, and then went to Effect > Keying > Keylight. In the Keylight settings, I selected the Screen Colour (yes, it’s the British spelling!) eyedropper and clicked on the green background in the shot to set the key color. I then set the View to Status, and adjusted the Screen Matte values until the leaves were white against a black background (in this instance, that was around 19.6 for Clip Black, and 93.5 for Clip White), and then adjusted Screen Balance to 15.

Setting the View to Final Result, the leaves were perfectly keyed out against the rest of the composition. To clean up the edges of the key to be smoother and more “line art” in style, I applied Effect > Matte > Matte Choker again to this layer, using the same settings of 3.0 Geometric Softness, and 75 Choke 1. Then to match the stripped-down color style of the grass, I applied Effect > Stylize > Posterize with a value of 3 colors. Looking good! Step 11 Darken the Edge of Your Composition

I wanted to darken down the edges of the composition with a vignette effect, so at 0 seconds I dragged in the Sky Solid from the Project panel to the timeline, then in the Toolbar I selected the Oval Mask tool, then double-clicked it (in the Toolbar) to add an oval mask to fit the solid layer. I then twirled down the Mask options for the layer in the timeline, and checked Invert to expose the middle and blacken out the edges. I then changed the Mask Opacity to 80% (which saves adjusting the opacity of the layer itself), and set the Feather value to 220px, which nicely softened the edge. 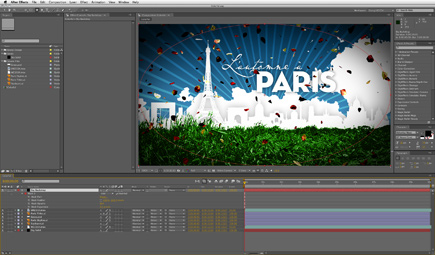 As as standalone piece, this was now looking really nice. But at the last minute, we decided to give the entire piece a strong color adjustment to really encompass the autumnal feel of the subject. I went to Layer > New > Adjustment Layer, which created a new transparent layer to which any adjustments applied would affect all the layers beneath, and then I chose to use the wonderful Magic Bullet Looks suite from Red Giant Software. First, I twirled down the Looks on the left side of the interface to view the Tints options, and chose Brilliant Orange Crush. Then from the Tools on the right side of the interface, I dragged in the Edge Softness tool and adjusted the Blur Size to 3% and hand-tweaked the circles of influence to refine the focus to the areas as desired. The final piece ended up not only with a line-art style to both the static and moving video elements, but a color adjustment, vignette and focus which tied all the pieces together into one beautiful design. Award-winning British designer Steve Holmes is the Founder and Creative Director of Energi Design in Sausalito, California. After studying design and typography for print, and being studio manager at two design and print production companies, he established Energi Design in London in 1994, creating layout, Web design, and video motion graphics for clients such as Nike, Warner Bros, Disney, Coca-Cola, Virgin Atlantic, Sainsburys, Toyota and Cadbury’s Chocolate, to name but a few. For the last decade, he has spoken on Adobe’s behalf at design seminars and conferences all over Europe and America (NAB, Siggraph, HOW Design Conference) on the subjects of design, typography, Web design and motion graphics in relation to Adobe After Effects and Flash.

Moving to California in 2002, he worked alongside Total Training for three years as their Director of Design & Animation Training, hosting multiple award-winning video training series, and is widely recognized in the motion graphics industry as one of the After Effects “heads of state.”

With Energi Design now settled in Sausalito, California, Steve runs the studio as Creative Director, and the company’s design work has garnered no less than three Webby Awards, one W3 Award and one Davey Award in the last three years for its Flash design, motion graphics and commercials for clients such as Adobe, Hiball Energy Drink, Artbeats, Virgin America and Le Tourment Vert Absinthe.