Would you have the nerve to ask your friendly neighborhood DI artist to color-grade your feature film in just one day? The team behind The Graves, a low-budget horror film written and directed by Brian Pulido and shot (with the Red One) by cinematographer Adam Goldfine, did just that. Fortunately, they had already done extensive color work for the film on the desktop, using Apple Color. The picture, they figured, just needed that special something – and maybe only in a few key scenes – to put it over the top. Working at DI facility LIGHTIRON Digital in Los Angeles, colorist Milton Adamou, at one time a product specialist on Quantel’s powerful Pablo system, agreed to tackle the whole feature at light speed, importing the filmmakers’ preliminary color decisions into a Pablo and putting the figurative pedal to the metal. The movie was released earlier this year as part of the annual After Dark Films Horrorfest: Eight Films to Die For series, and just arrived this week on DVD from Lionsgate Entertainment. F&V got Adamou on the phone to talk about his breakneck work on the project, and why he thinks that kind of quick-and-dirty DI just whets a filmmaker’s appetite for the real thing. 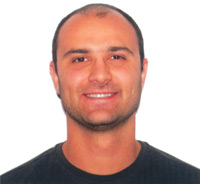 FILM & VIDEO: The story of the DI for The Graves is really a story of efficiency, isn’t it?

MILTON ADAMOU: Yes, it is. The Graves was an interesting project. The director and DP came in with a budget of one day to do the movie. Initially, I laughed. And then, when I realized they were serious, I laughed again. And then I thought, “Well, this is going to be a little bit tough.”

We’re not talking about a one-and-a-half-hour French movie where everything happens in one bedroom with dialogue between two people. We’re talking about a horror movie, with fast scenes and many different locations. They had spent quite a long time working on the film in Apple Color. There was no real finished quality to it, which is why they came to us, but at least it was a good starting point. It definitely had some consistency to it. Shots taken over a period of time in a day had been matched in their scene. Many times when you’re doing a DI, there’s a split between the creative grading and the matching, where you’re just trying to get to a base level. They had come to that level.

So they actually had that consistency that, sometimes, an indie can have a hard time getting.

Particularly on the small ones, there’s frequently a real horror scenario – pardon the pun – where you have crushed blacks and all your whites are blown out and any work that’s been done in visual effects has been pushed into the wrong color spaces. If they’ve messed up the image as a whole, you’re left with the worst result when you ime the movie. This didn’t have any of those hallmarks. It was a clean, consistent base to start working on.

This is the difficult thing that happens with indies. It’s the whole thing that’s happening in our industry. You can do it all by yourself. You can do it all at home. But it depends on how serious you are, and on the complexity of what you’re trying to achieve. If you’re trying to create a cut for a commercial or music video, those are 30-second or four-minute pieces. It’s easy to do that. If you’re trying to time a whole movie, well, it’s achievable. Given enough time, you could color a movie on a Game Boy. But would it be a pleasant experience? Are you making things happen in real time? The more inexpensive a solution is, the more restrictions it will have. You know the old rule, you get what you pay for? I find very few exceptions to that rule in life, let alone in post.

So by the time they came to the DI suite, they just wanted to tart up the show ‘ give it a little bit of snap and character in a few scenes. And once they put the images on the screen, they realized that actually you need it for the whole movie. You don’t want one scene to really sing, and then contrast with everything else. So we ended up timing the whole movie.

In a single working day?

I think it was eight and a half hours, with a very brief lunch break!

How does that happen? Did you settle on pushing very quickly from scene to scene, or did you start by completing the key scenes and moving backward from that?

That’s a good question. We started with the scenes that we were told were going to need the work. We started in the last reel, in the final confrontation, as the zombies are running after the heroines and all hell breaks loose.

I was quite clear from the outset: “Look, if you want us to do this in a day, then we can have minimal involvement from you guys. For each scene, tell us what you’re trying to achieve, and then I’ll just scream through it.” With creative color, just like creative editorial or sound mixing, what takes a lot of time is the interaction between you and the client. That’s so, so important for the creative process, but it’s a luxury you can’t afford when you’re trying to time a movie in a day. Instead of taking it completely away from them and saying, “OK, leave and come back in eight hours” – which is not the way I like to work or have ever worked – we said, “OK, at each scene, tell us what we’re trying to do, and then we’ll do it, and we’ll review the scene after we’ve timed it.” That’s the only reason we could complete it in the amount of time we did.

Another approach would have been to go from scene to scene and time two or three hero shots and then let an assistant come in and apply that look to the other shots in the scene. That could be inefficient when you’re working with a smaller project. On a bigger project, that back-and-forth could be absorbed in the weeks of work you have available. But on something that’s going to take a day, it’s about rolling up your sleeves and getting into it.

If we publish this story, will everybody be coming to you, even if they’re ill-prepared, saying “Hey, I want to do my DI in one day!”?

What the director and DP saw at the end was that if, rather than spending so much time in Apple Color, they had come to us for one or two weeks of color in the DI suite, it probably would have actually cost them less overall. You know what it’s like. You nickel and dime things, especially on a small show. But you need to know where to make compromises and where to spend money. It strikes me as bizarre that you wouldn’t want to spend your money finessing your pictures, making them look like what you had in mind when you started the project in the first place. Even though we were able to achieve 90 percent of what they wanted, they had to think, “Wow, I wonder what we could have done with 40 hours of color.” If you spend a little more money and time, you can exponentially increase the value of your picture. And that translates directly when you’re trying to sell your movie to a distributor.

It’s always a double-edged sword. You expose someone to decent work in a day, and they might say, “This is what we want to do.” But usually, when you give them a taste of what can be done, I find that they go to their financiers – or to their credit-card companies – for the extra money they need to give their movie the treatment it deserves.