Veteran cinematographer Randall Dark isn’t content with existing technology. A pioneer in HDTV production since 1986, Dark says he’s always keeping his eye out for something that will rev up his creative gears and throw him into a new world of images, workflows, and storytelling possibilities. When he saw the first images of Panasonic’s new AG-3DA1 3D AVCCAM camcorder, he knew he had found it. “That thing looks like Wall-E,” he remembers thinking. “Physically, seeing that camera, I was excited.”

Photos of helicopter rig and penguin habitat by Shane Marr

In late May, Dark inaugurated the Macao, China International Digital Cinema Festival as artistic director, and beefed up the program by flying in 3D experts from around the world. All that high-end talk about stereography helped ready him for shooting his latest project, 3 Cities in 3D, a stereo-3D documentary on three Tennessee cities: Sevierville, Pigeon Forge and Gatlinburg. He flew back from China, spent a leisurely day and a half at home, and then headed out on location for the new shoot, having wrangled an early 3DA1 from Panasonic, where officials were aware of his status as a power-user of early-adopted technology. “It’s been a little bit of a whirlwind, but a great learning curve for me,” he says. Film & Video asked him about putting the $21,000 camera, which ships on a made-to-order basis this fall, through its paces.
FILM & VIDEO: Talk a little bit about how 3 Cities in 3D came together.

Randall Dark: When I flew to NAB, I had this project in my back pocket. I had talked to the three cities, asking, Ã¢Â€Â˜If I shoot this in 3D, is it something you could use?’ And I talked to my friends at Wealth TV, which is going 3D, and I asked, Ã¢Â€Â˜If I direct this program with this prototype camera, will you guys air it?” So I was moving all these chess pieces around. And then I went to NAB and saw the images, saw the camera, and thought, “I’m there.” It’s the best of all possible worlds. 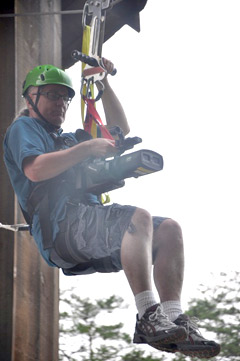 I’ve got this camera, and I’m in places that are outrageous for a 3D rig. In one shot, I’m holding the camera shooting down a zip line. Then I’m in Ripley’s [Aquarium of the Smokies in Gatlinburg] in the penguin area shooting extreme close-ups from a tiny little space that would have been impossible to get into with an F35 or a Red [stereo rig], but this camera is unique. And the images look spectacular.

Historically, you’ve got a beamsplitter and these huge rigs and it’s a different way of shooting. This is so interactive, it is so real-time, that just by looking at my rushes coming back in – I’ve got the Panasonic [BT-3DL2550] 3D monitor – I go, “OK, in the last two weeks I’ve gotten way better at shooting 3D.” It inspires me.

Other than simply squeezing into tight spaces, what’s another example of something you can do with a 3D camcorder that you can’t do with a two-camera stereo rig?

I shot Chinese acrobats. Part of 3 Cities in 3D is shot in a theater with these incredible performers. I shot in 3D and looked at the pictures and thought, “Oh my goodness – do they have a contortionist?” So I went back and brought the contortionist on stage. Because [the shooting process] was so fluid, I could direct her. I could move the camera into eight set-ups in 35 minutes because of the nature of the technology and the interaction I have with the camera and talent. Had this been a traditional rig, it would have been a different methodology.

Were there any limitations of the form factor for you?

In the early years of HDV, because of how light these cameras were, I was always concerned. When you’ve got a really light camera and you’re trying to do smooth pans and tilts it doesn’t have the weight. This camera has got enough weight behind it. And because you’ve got two lenses at the front, you can balance the camera. I haven’t had an issue. Most people like light things. I’m the opposite. But this camera doesn’t present any issues with not being able to put it on Jimmy Jibs. I had it in a helicopter on a gyro mount.

So the footage doesn’t look like it was shot with a Handycam.

Images are really about lighting and framing. I can have a $180,000 camera, and if I don’t know what I’m doing it’s going to look like garbage. Or I can have an $8,000 HDV camera and I can make it look really good because I understand lighting. I don’t see any limitations in form factor. In fact, just the opposite. Historically, these shots would be difficult with other types of cameras. When was the last time Steve Schklair or Vince Pace held onto a 3D camera and went down a zip line? It’s another tool in the toolbelt. If I’m going to shoot a $300 million movie, I’ll use equipment that’s perfect for that. If I’m doing a documentary for Wealth TV or Discovery or National Geo, all of a sudden there’s a new option that puts it in another technical realm and another financial realm.

It sounds like you’re happy with the quality of the stereo this camera captures.

I am very happy. But it doesn’t matter what I think. More importantly, I bring my client in and say, “I just shot this for you. What do you think?” And they’ve been blown away. Panasonic is genius. I look at the physics of this camera and I’m blown away by it, by the images, and by how it converges in the field. But if my client walks in and looks at a 3D monitor and says, “What’s the big deal?”, then there’s a concern. Do I want to keep working with this camera for a number of projects? Absolutely. Is it perfect for every project? No, of course not. No technology is. But it’s been a while since I’ve been excited about something. Are there stories to be told that we haven’t seen before? Absolutely. For product launches or point-of-purchase launches, you can say, “I can do this in a cost-effective way.” Look at what’s been happening in the last four years in the 3D world. People are going, “This is fun. I want more.” And I’m going, “I’m willing to shoot more!”

People sometimes look at this camera and, because it’s such a new thing, they assume it’s a novelty – that it’s not built to the same standards as a proper broadcast camera.

Everything has its limitations and drawbacks. When I look at this camera, I’m definitively saying I will do many more projects with this camera because it works and I think the images look phenomenal with this technology. That being said, I haven’t blown things up on a 70-foot screen. I just shot with the camera and I’m going into post. But the images in post blow me away. Is it right for everything? Don’t know yet. I’m still testing. Will I do more projects? Yes. Do I like the camera? Yes. Is it fun? Yes. 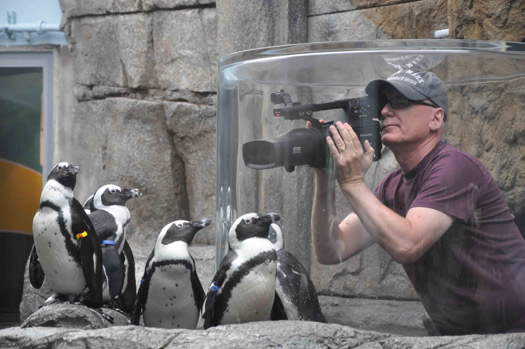 As a cinematographer and camera operator, are there new adjustments you have to make and be aware of on the camera that relate to stereography?

There’s a learning curve. I always say, “If it was easy, everyone would do it.” But if you take this camera and put it through rigorous testing, and if you’re talented, you’ll figure it out quickly. There are things that work better than others. I have a style of shooting, just like any cinematographer or director. I can’t wait to see other cinematographers use this camera and see what they do. It’s all about storytelling, lighting, and framing. As a storyteller, I think you have to be careful of using 3D. It’s not all about having something come out of the TV. At times I don’t think that’s the right shot in the storytelling. At times I think the 3D has to happen behind the fourth wall.

And this camera allows you to determine where that wall is in your footage?

Absolutely. This camera allows me to look at the fourth wall, the proscenium wall, and be in front of it or behind it. It’s my choice. I decide that. Because of the nature of some shots, nothing is going to be popping through. But you use it as a technique. I directed a dance sequence that is being shown in the documentary. There’s an ending to it that’s not in the dance routine, per se, but it will be in the documentary. The 3D is all happening behind the [screen of the] TV, and then, at the end of the sequence, the cowboy hat that she’s dancing with pops through the TV as the final statement. Nice touch, looks great. You create that moment. You don’t want people to be constantly reminded, “It’s 3D! Look at us!”

Earlier, you said you have a commitment from Wealth TV to run this. Is that a 2D commitment?

No, that’s a 3D commitment. They’re switching over to a 3D channel. Everyone’s lining up to switch over. It’s the next toy for the consumer and for the professional.

So for you at this point, it’s very real. It’s not a theoretical business.

I don’t do things just because they could be interesting. I would have not have gotten this camera from Panasonic if I did not believe in it fully. As a matter of fact, I’ve started my own 3D stock footage library, working with Footagebank, because there’s going to be a huge demand for it. If the math doesn’t make sense, you can’t do it. James Cameron’s world is not my world. I’m a meat-and-potato kind of guy. I love new technology, but the projects I’m going to do have to make sense financially and the funding has to make sense. With this new technology, 3D is viable for everybody. Distribution channels are being created as we speak. One of the things I’m talking to cities about is, in their tourist centers, putting in a high-def TV and when people walk in they watch a program, and they can decide where to spend their money. There are lots of ways to use this technology cost-effectively today.