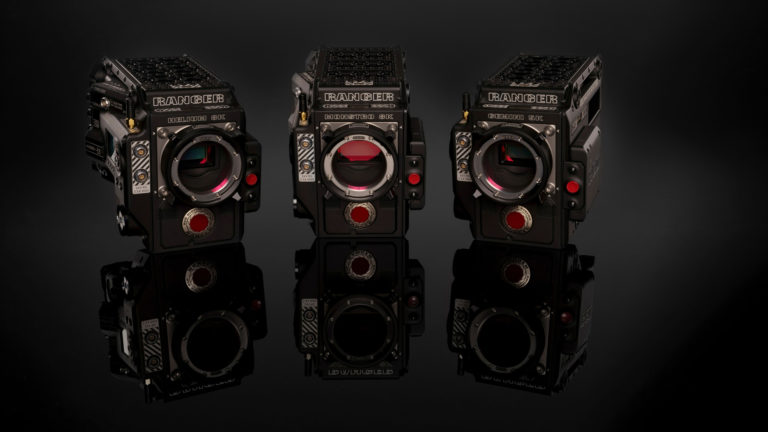 How DPs Kramer Morgenthau and Jonathan Freeman Get the Period Look

How do you make 2010 New York City look like Atlantic City in the 1920s? You take over buildings in Bedford-Stuyvesant, move into soundstages at Steiner Studios in the Brooklyn Navy Yard, and build out a 200-foot boardwalk that lets your characters walk from indoor sets into the sunlight while the camera rolls. And it helps to shoot film. Cinematographers Kramer Morgenthau, ASC, and Jonathan Freeman explain.
HBO’s new series Boardwalk Empire is being executive-produced by Martin Scorsese, with a writing team led by Emmy-winning Sopranos writer Terence Winter. The pilot was directed by Scorsese and photographed by Oscar nominee Stuart Dryburgh, ASC, while alternating episodes of the series are being photographed by Morgenthau and Freeman. 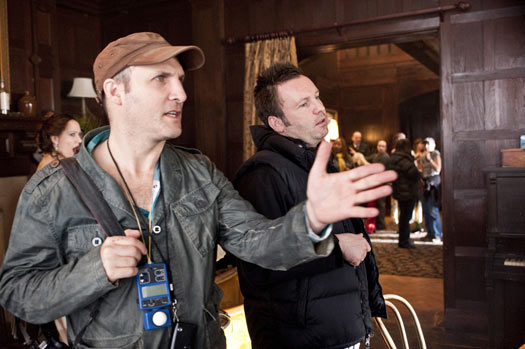 Morgenthau says the support he gets from the network is unsurpassed. “We’re shooting on film, have a lot of creative input, and are given a lot of support and encouragement in terms of the production – all the tools one needs to do cinematography on a cinematic level,” he says. “The bar is set very high at HBO, and you have a challenging mandate to do some super high-quality work, and that feels good.”

An episode is usually completed in 12 days, with three or four days on stages and the rest on locations. The main sets are built on soundstages at Steiner Studios in the former Brooklyn Navy Yard. Some practical locations are actually taken over and dressed by the production and remain dark when not being filmed. Most are buildings that have either maintained their period quality through the years or have been restored. Two examples are in the Bedford-Stuyvesant section of Brooklyn, where existing buildings portray Babette’s, a cavernous nightclub, and the Four Deuces, a brothel where Al Capone operated. 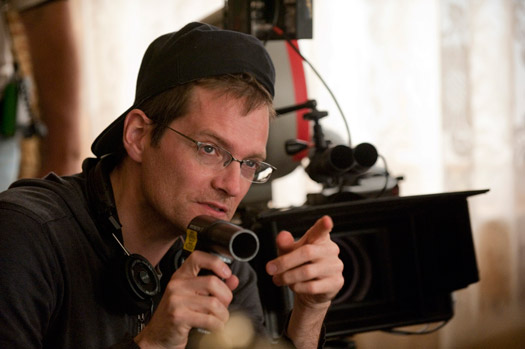 Freeman says that the sets, props, costumes, hair and makeup are all similarly important nonverbal cues. “The scripts are quite ambitious,” he notes. “We are trying to maintain the quality that was established in the pilot. The production design is sensational. It’s not difficult to achieve some striking photography simply because what we are photographing is exquisite. It’s definitely a cut above what you might expect for television.” 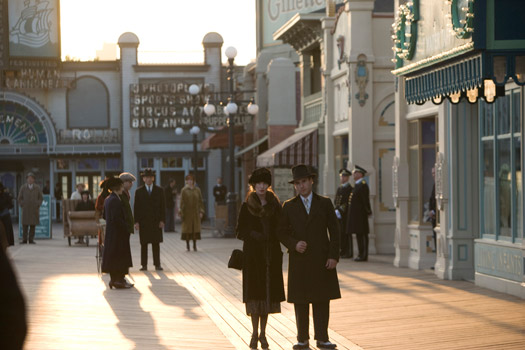 Nearly 300 feet of period boardwalk was built from scratch in Brooklyn, where the characters can walk from natural exterior daylight into interior sets of storefronts and casinos. (Photo credit: Craig Blankenhorn, © HBO)

The most unusual set is the boardwalk itself. A couple hundred feet of period boardwalk was built from scratch in Brooklyn. The characters walk from natural exterior daylight into interior sets of storefronts, hotels and casinos, adding to the realistic feel. For some situations when the camera looks back toward the water, a large blue screen takes the place of the water and the city skyline, which are added later via visual effects.

“It’s important for certain scenes to have that feeling of bright, slightly overexposed sunlight to communicate that we’re at the beach,” says Freeman. “It’s ironic that we have one of the more beautiful views of Manhattan, and yet we have to replace it. But it’s a beautiful set. Bob Shaw, the designer, created a miracle given the budget he had. The composites look great. 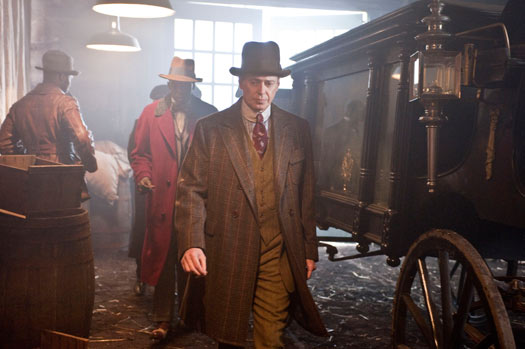 “In our boardwalk interior-exterior situation, the ability of film to retain the range of highlights, midtones and shadow detail is exceptionally helpful to us. Otherwise, we’d need to pump a lot more light into the interiors and be challenged by weather conditions. It’s certainly a relief to be shooting film – the dynamic range and highlight detail in film is so far superior to HD.”

Lighting is partly influenced by the Ashcan School of painters, including John French Sloan and George Bellows, American artists whose realistic style dealt with everyday subjects around 1900. The cinematographers also referenced the first and second Godfather movies, photographed by Gordon Willis, ASC, and Once Upon a Time in America, photographed by Tonino Delli Colli, AIC, as well as other films that touch on the period or the subject matter.

Morgenthau says he and his crew approach each episode as they would a feature film. “The producers encouraged me to give the cinematography a strong expressionistic look and mentioned that each episode should stand on its own,” he says. “I tend to push the look very hard, with very strong contrast, when it’s called for. We use the extreme ends of the gray scale. No zone is not visited. In my mind, the universe of the 1920s interior life depended on natural light. I push windows and other sources very hard, knowing that they will hold on film. You just can’t do that with any other capture media.” 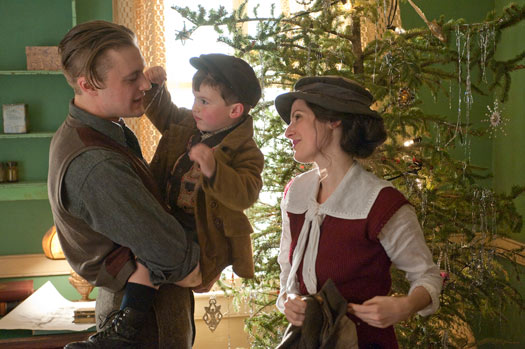 The story follows a wide range of characters, and the lighting can be more gentle in some settings, like the world of a young Irish immigrant mother of three whose husband is killed. Wealthier homes include more electric lighting, which is consistent with the period.

Other aspects of the cinematography are classical. Movement is generally done with a dolly or a crane, and is often motivated by the actors’ movement or by a particularly poignant narrative moment. There are generally two Panavision cameras, used as a concession to the schedule rather than as a stylistic choice. The cameras are often paired with Angenieux Optimo zoom lenses and the focal lengths tend to be wider in order to place the characters in the environment. Technicolor New York handles post-production, with Technicolor guru Joey Violante overseeing dailies colorist Josh Olive and final colorist Martin Zeichner.

“The dailies look great,” says Morgenthau. “They are one-lights, but our looks are dialed right in as much as possible. I take on-set stills, and I color-correct them and mail them in with notes, and they match those as closely as possible. That way, the dailies look can be bold right out of the gate, and everyone sees what it’s going to look like in the rough cuts. Eventually, we go back in and color-correct from scratch on a Lustre, using the dailies as a reference. Steve Turner and Jennifer Ames are the dailies people from HBO, and they are doing a great job protecting our looks.”

Morgenthau notes that shows like Boardwalk Empire, combined with improved home display technology, continue to erase the distinction in the public’s mind between cinema and television. “Television cinematography has evolved tremendously,” he says. “The writing rivals ‘ and often surpasses ‘ feature films. Home viewing is evolving into a cinema-like experience in some living rooms. Audience expectations are higher and higher. Meanwhile, people are inundated with images on all kinds of devices, and therefore as image-makers we are challenged to make our work stand out. With bigger and better screens, you see everything. In our case, film’s texture enhances the period feeling. It changes the experience and brings you into another universe. There’s really nothing like it.”