While not a milestone release, this incremental upgrade includes new support for camera formats and an improved Adobe Story

We know from the way the world works that they ought to come in predictable waves. Every eighteen months we eagerly await them. Invariably powerful and potentially game changing, we're not talking about the Tibetan monsoons or the latest White House scandal. We're referring to milestone releases from Adobe: Version 4, Version 5, version 6-uh, oh wait. I mean version 5.5. Hey!   What's with the new incremental release?
Given the pace of today's advances and new capabilities and trends, the usual eighteen-month release cycle is no longer adequate to address the clamoring demands of the umpteen After Effects, Photoshop and Creative Suite users around the world. A case in point: Adobe now supports HTML5 inside Creative Suite 5.5. For some time the lack of Flash support on Apple devices has been a thorn in the side of CS users, fifty percent of whom it is said utilize Mac OS almost exclusively. Luckily for us, Adobe, presiding over some of the most widely used software on the planet, is platform-agnostic, a breath of fresh air given the Mac vs. PC discourse that at times can verge on religious zealotry.

After Effects After All

As a cinematographer I admit my bias for evaluating products from a camera imaging perspective. So naturally, I'm very excited that AE 5.5 now features a Warp Stabilizer that can smooth out a shaky camera move and impart the elegant look of having used a crane or jib arm. Most stabilizing software like Apple's SmoothCam require considerable enlarging of the frame to apply the required compensation. AE's Warp Stabilizer is much more respectful of the original frame boundaries, and while not as sophisticated as proDad Mercalli's v2 Stabilizer (read my review here: http://www.studiodaily.com/studiomonthly/currentissue/REVIEW-proDAD-Mercalli-V2-PRO_12967.html) the WS feature in AE5.5 can nevertheless handle quite admirably the tilting and churning of the camera bumping along the z-axis. 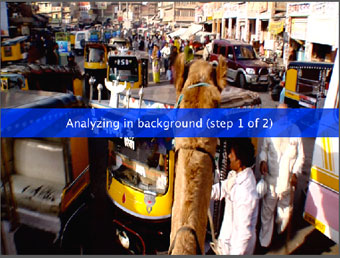 AE 5.5's Warp Stabilizer can transform a bumpy inelegant move into what appears to be a smooth dolly shot – and it does so with very little loss of resolution! Very nice. 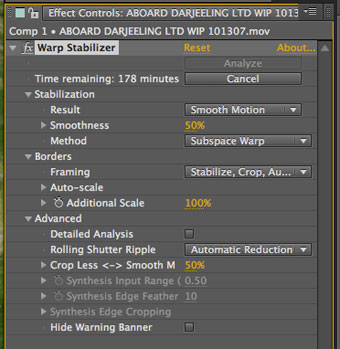 Accomplished camera folks understand that the fall-off in focus produced by a genuine optic can be highly variable based on ambient atmosphere and the character of lighting. Thus it is with a grain or two of silicon that I examined AE's new capability.

For shooters with traditional smallish sensor cameras, the ability to introduce a narrow depth of field and soft focus into backgrounds is an attractive proposition. For some folks this could be reason enough to acquire CS5.5; effectively gaining the advantage of a larger-format camcorder without the performance and workflow challenges that currently plague shooters relying on DSLRs and other makeshift video du jour capture devices.

In my tests the lens blur can be quite realistic depending on the particular scene and how it was originally captured. In AE5.5 the halation produced by a de-focused lens serves up a reflection of the lens' iris blades, the shape and character of which is user-controllable and linked to lens aperture and focal length. It is important to therefore capture the original scene with the proper focal length lens, as this will go a long way to selling the soft blur effect and narrow DOF introduced in post.

Since much of my work these days is in the 3D realm I was eager to evaluate AE5.5's new stereo support, especially how AE now facilitates review and output of scenes from its own built-in 3D camera.

Unlike real-life the setup of the AE's dual-camera rig is fast in just a matter of seconds. Once placed a bevy of sliders and controls allows the varying of key parameters, such as lens focal length, camera imager size, convergence and inter-axial distances.

Working with footage derived from a physical 3D rig we use an approach similar to the popular Dashwood or Neo3D plug-ins. After coupling of the left and right eyes, we can output a stereo image in one of nine configurations, from interlaced and side-by-side (SbS) to various flavors of anaglyph. Most pleasantly I can now preview my 3D scenes directly out of After Effects via my AJA Kona 3G card and HDMI to an active high-end display.

Speaking of compatibility, Sony EX1/EX3 shooters who want to maintain conformity of their projects with the original camera footage, can now render compositions directly out of AE in the XDCAM EX format. With control over resolution, pixel geometry, and frame rates, this could be just what the doctor ordered for those of us operating in the lower-rent districts of XDCAM land.

In simple terms the Merge Clips function combines the individually captured audio/video files into a single clip. To access this feature we select pre-defined in and out points, time-code, clip marker or clapper as a sync reference. Since DSLRs do not normally provide time-code, the user must specify the in/out/mid-scene synchronizing references. PP5.5's Merge Clips is not as elegant or efficient as Singular Software's dedicated Plural Eyes' plug-in, which conforms the master audio waveforms to a scratch track recorded into the camera. 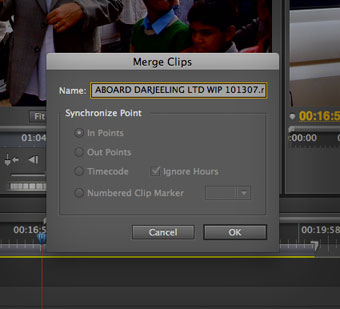 The Merge Clips feature inside of Premiere Pro 5.5

The most dramatic improvement in Premiere Pro 5.5 is the increased speed evident when playing back processor-intensive effects such as blurs, time remapping, and fast or slow motion scenes. Such effects are notoriously difficult (and expensive) to playback in real-time without rendering, which is why PP5.5 is such a leap forward with respect to base-level efficiency. Thanks to GPU acceleration and the Mercury Playback Engine, the 64-bit support introduced in CS5 is coming of age and showing its true colors in PP5.5.

A Word about Closed Captioning

For much of the last decade I cut my teeth in Hollywood teaching DVD and Blu-ray authoring to aspiring studio programmers. Regardless of platform the matter of closed-captions usually involving a third party was often the source of confounding snafus and failed discs. I attributed this weak link in the pre-mastering process to the notable lack of integration with the NLE and the standard post-production workflow.

To many producers, closed captioning can no longer be regarded as an afterthought. If you're creating programming for public television or other publicly financed institutions like museums and certain non-profits, you'll likely be required to provide closed captions as a specified deliverable.

Simplifying the process would therefore appear to be in our interests, as more producers on shoestring budgets seek a low-cost option to meet their CC obligation. With support for SD (608) and HD (708) closed captions via SCC and MCC file formats, PP5.5 offers the ability to sync the CC files directly on the timeline and correctly display them, thus avoiding any unpleasant surprises later. 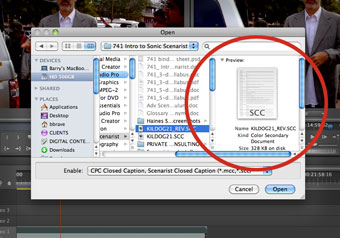 While PP5.5 supports the insertion of closed-captions and transmits that data with video over FireWire/SDI, most encoders for DVD or Blu-ray do not pass along CC to the encoded file, so some provision must still be made to re-insert the closed captions when authoring to disc.

CS5.5 Plays Well with Others

One of the nice things about Adobe applications is how well they play with others in the nursery. I am a huge fan, for example, of Adobe's review utility whereby collaborators in remote lands can review sequences and make frame-accurate notes using only their ordinary web browser. In PP5.5 a dialog box further facilitates the process, offering a range of export presets for encoding to CS Review. The service is free to CS users through April 12, 2012. 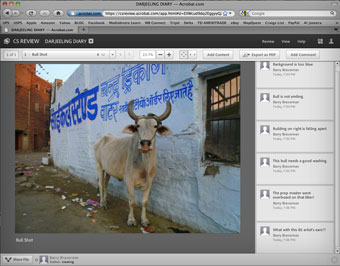 CS Review is a collaborative tool that will work with a wide range of media formats.

Playing with Final Cut Pro in your spare time? No problem. CS5.5 offers enhanced tripping to and from FCP, supporting such parameters as scaling of a clip's pixel aspect ratio between non-conforming sequences, and retention of three-way color-correction data. PP5.5 can even utilize the same keyboard shortcuts and layouts we've come to know in FCP, Avid Media Composer and other popular NLEs. 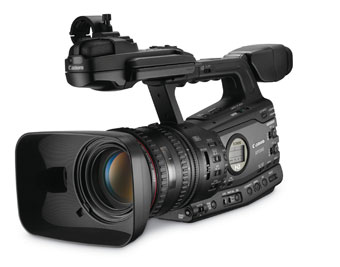 Premiere Pro 5.5 natively supports the direct import of Canon XF files without transcoding. Spanned clips are now displayed, as they should be as a single file. 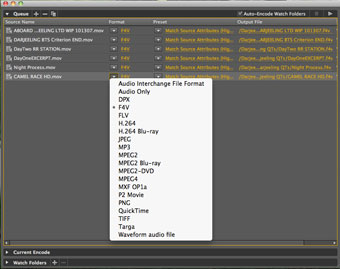 Media Encoder 5.5 offers a more robust watch folder and a gaggle of new presets when delivering to devices of various screen sizes and resolutions. No problem playing with others here: iPhones, iPads, smartphones, SD and HD – however you choose to fraternize in this ever-expanding output community, you're pretty much covered in CS5.5.

The Real Story Is Adobe Story

Story, which we first starting hearing about last year, is curiously still something of a stealth application inside the Creative Suite, and you won't read much about it. Formerly buried inside Adobe's OnLocation in CS5, it is now seeing the light and showing its true potential in CS5.5 as the ultimate metadata integration tool.

Adobe Story is more than a mere competent scriptwriting application. It is a means of integrating the myriad of notes and details associated with a production, from the script and supervisor's notes to location still images and wardrobe references, into a project's metadata that then carries forward in a highly organized way through the entire show. For example, the Speech Analysis function in PP5.5 can embed a Story in the timeline, allowing comparison of the script to a spoken text, for spotting a missing piece of voice-over, for instance, or for identifying a discrepancy or failed line in the dialog.

In future incarnations of the Creative Suite, Adobe Story will become Command Central for managing projects, from script and storyboard through post-production. It will be the go-to resource for lens and scene data in the case of a required re-shoot, and indeed I foresee metadata from the camera itself, including setup details, time-code, clip markers, and lens data, being transmitted via Bluetooth directly into the Story application. The info will then be available for creating, among other things, more naturalistic and compelling effects downstream, i.e., using AE5.5's new Camera Lens Blur.

Summary: With new support for a range of capture formats, expanded After Effects capabilities and the introduction of Adobe Audition for Mac, CS5.5 has a lot to offer a wide gamut of new and emerging content creators.

What's Missing: Adobe Story is still a work in progress with the promise for future integration of camera and lens metadata into a production and script supervisor's notes. Launch time of suite applications, especially Photoshop, are still relatively slow by industry standards.