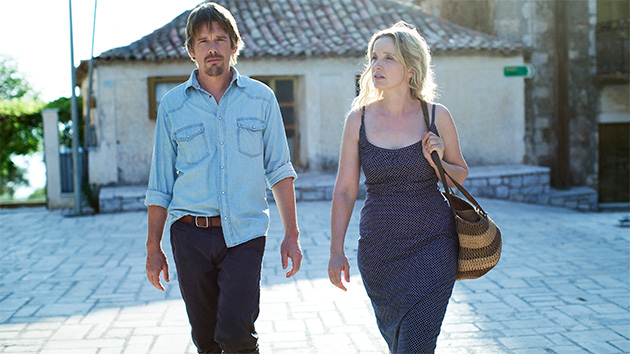 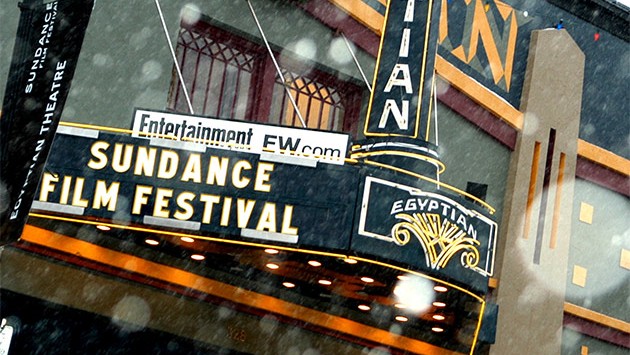 The short film "Me + Her", which will debut at the Sundance Film Festival on January 18, is not what it seems. A live-action love story made to stop-motion scale completely in cardboard, the film carries more weight than its paper components suggest. Love, illness, thoughts of suicide and more traverse the souls of these recyclable creatures.

It also demanded a much longer development and production timeline than animated or live-action shorts of similar length. "I hadn't been working in the industry very long and didn't know a ton of people, so I figured I could just make all this stuff myself," says writer/director Joseph Oxford, who designed and fabricated all of the film's puppets and nearly 60 percent of the sets himself during the last five years. Many of the 96-person crew who subsequently spent more than 11,000 man-hours completing the set since full-on production began last March donated their time to help him complete that original vision. "Me+Her" is Oxford's first film as writer/director. His previous credits include Lee Toland Krieger's Celeste and Jesse Forever (art director) and The Vicious Kind (set production assistant), which was shot by "Me + Her"'s DP, Bradley Stonesifer. The idea for the short began in the form of a crude cardboard-and-rubber-band guitar sitting on Oxford's desk that one day took on more animated features. "The rubber band looked like lips, so I added eyes and that character was the prototype of what all the puppets eventually became," he says. Six years, 378 box-cutter blades, countless Band-Aids and 562 glue sticks later, the film finally began shooting last year in a warehouse in Los Angeles.

Most of the final sets were made in a series of three-month shoot-and-tear-down cycles. "We would build, shoot, tear down, and start all over again," says Stonesifer. Aided by Oxford's two art directors-cum-industrial designers, the team built the characters as one might a stop-motion menagerie. "Each of the heads was designed for a different thing," says Oxford. "There were wide-shot heads, and close-up heads with wires sticking out of them to control the eyes, mouth and eyebrows." The script was only six pages long but took a whopping 18 days of photography due to the story's various setups and character arcs. "With actors, you shoot roughly three to five pages a day and shoot your scenes from tips to tail, cutting things out in post," says Stonesifer. "One page of script took us three days to shoot because everything was meticulously shot-listed and photo-boarded. In essence, we were editing as we went. If this was a feature, it would have taken 270 days." The project's cameras and kit also evolved over time. "We did test shoots for this film three or four years ago in our buddy's garage with an ENG two-thirds Panasonic camera," says Stonesifer. "Those early shoots helped us figure out how much space we needed and how long it would take to build everything. But once we got the financing together we had so many more options: EF- and PL-mount, full frame, Micro Thirds, half-inch sensors. In the end, the form factor of the Blackmagic Cinema Camera made the most sense due to the scale."

Stonesifer shot with both the 2.5K Blackmagic Cinema Camera and the newer Pocket Cinema Camera. "Our puppets and everything in their world are all about one-fifth scale. We needed a camera that was small enough to move around that world and wouldn't get in the way of the set or the puppeteers." Shooting miniatures, he says, makes it challenging to set depth of field to make things believable at that scale. "If you're shooting Super 35 on a human and you shoot a 50mm lens at six feet at a four, your depth of field is fairly shallow," he says. "But if you take that same lens and you move it close to a puppet, your depth of field is even shallower, which means you have to stop down substantially to simulate a similar feel. For us, the smaller sensor of the Cinema Camera was an advantage. We didn't need to stop down as much, which meant we didn't have to have such a big lighting setup. We could go much smaller, which ultimately saved us money over time. Our largest light was a 5K." The set was lit with about 30 Kino Flos hung on a curved 90×40-foot backdrop. Stonesifer shot with a mix of PL-mounted Ultra Primes, Canon Cinema Zoom and L-series lenses and Super 16 Super Speeds, which he used on the Pocket Cinema Camera. When the team began shooting, the Pocket Cinema camera was still in production and hadn't yet been released. "We needed a really small camera for a crucial pit scene and were actually originally going to go with the GoPro," says Stonesifer. "But the Pocket came out literally the week before we shot that scene, and we are so glad we went with it." That set's dimensions came in at four feet wide and four feet deep. "We shot most of that scene handheld and used a monopod to make a boom stick. We also had a Jimmy Jig for our hilltop scenes and used a number of Dana dollies."

Using the BMCC's raw footage during the post workflow, he says, gave them the unique look in post that Oxford first envisioned. Hollywood DI's Aaron Peak, who Stonesifer says was involved in the project early on, graded the film with DaVinci Resolve. "We had taken our test footage to Aaron and had run it through the paces against other cameras," he says. "We ended up going with Blackmagic because we had more room to push it around in post." With virtually no experience with puppetry or animatronics of his own, Oxford says it was the skilled puppeteers led by actress Keiko Agena (Gilmore Girls, Scandal, ER) that most informed the film's drama. "I would start by finding out what would make their jobs easier and they would suggest things that forced us to work in new ways on set. I grew up taking toys apart and putting them back together, and I learned as much about creature effects and motion transfer as I could. But the puppeteers, like Keiko, are actors themselves, so they brought a lot to the performance that I never had in my head when we started."

Stonesifer, who co-produced the film with his wife Emily Bloom and Marco Perego Saldana, says the collaboration and good will on set was even more amazing given the shooting conditions. "We were shooting in a warehouse with no air conditioning and it was the hottest week of the summer. We couldn't open the doors, either, or else the breeze would take down our sets in a matter of minutes. To have people that continued to come out day after day and not tell us we were insane was a testament to how much everyone loved the project." A veteran grip and electric crew helped make sure everything was kept to code and running smoothly. Collaboration, says Stonesifer, was also the key to the way the film evolved. "We pretty much figured out with the puppeteers and art directors on set what was the best order to shoot in, which directions to shoot in and how to flip the stage around to make it all work. It was very nonlinear shooting and it was a challenge. Knowing what we know now, I think if we were to start from scratch it would be a completely different film, but the adventure was well worth it."

Adds Oxford, "I'm really ready to work with actors, but never say never when it comes to puppets!"