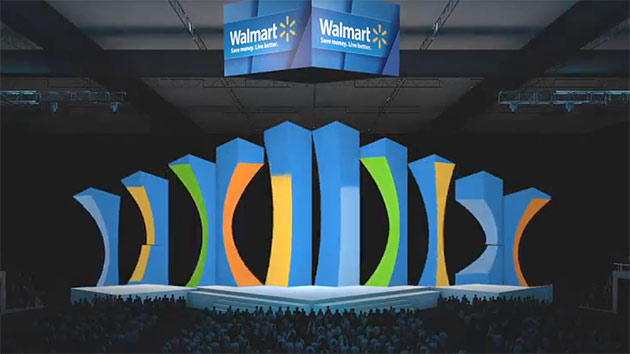 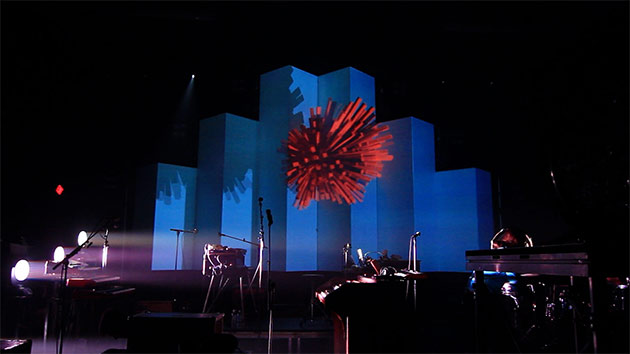 Projecting a Really Big Show on the Washington Monument

The National Mall in Washington, D.C., will be lit up as if by rocket engines this weekend, when the 17-minute “Apollo 50: Go for the Moon,” a show commemorating the 50th anniversary of the Apollo 11 mission, is projected on and around the Washington Monument. Conceived and commissioned by the Smithsonian National Air and Space Museum and made possible through a partnership with the U.S. Department of the Interior and London-based design studio 59 Productions, “Apollo 50” began running on Tuesday night, with a static image of the 363-foot-tall Saturn V rocket projected directly on the east face of the monument from 9:30 to 11:30 p.m. But at 9:30 p.m., 10:30 p.m., and 11:30 p.m. Friday and Saturday night, July 19 and 20, the show will roar to life on the monument and on supplemental screens on the mall; a 40-foot-wide version of the original Kennedy Space Center’s countdown clock is part of the presentation.

Having created video design for the Opening Ceremony of the London 2012 Olympic Games, the design and creative direction of the David Bowie is exhibition, and the projection and video design of the National Theatre’s War Horse, the award-winning 59 Productions took the project in stride while recognizing its unique nature. The project rented gear from DWP Live, a Nashville company specializing in projection-mapping technology, including a fleet of 32 30,000 lumen Barco laser projectors to display pixels pushed by media-server software from Disguise. When we spoke by telephone on Thursday afternoon with “Apollo 50” director Richard Slaney, who led the 59 team, he was still caught up in pre-production night shifts, waiting on site for D.C. to go to sleep each night before previewing the show in the wee hours of the morning. We asked him about the creative and technical challenges of the project, including why it may represent a once-in-a-lifetime opportunity. “Apollo 50: Go for the Moon” created by 59 Productions, conceived and commissioned by the Smithsonian’s National Air and Space Museum.
Photo: Evelyn Hockstein

StudioDaily: Is it still pretty crazy for you there, or have things calmed down a little bit?

Richard Slaney: A little bit, yeah. We’ve got a bit more to do yet.

We’ll try to get you back on the job as quickly as possible. But can you talk about what went into this, from both the creative side of making the video projects and the technical side of actually executing it?

Well, creative is obviously where we start with these kinds of things. We project on buildings all over the world — the Sydney Opera House, the Guggenheim in Bilbao, the Royal Albert Hall in London — lots of different, iconic buildings. And the Washington Monument is obviously iconic. As a surface it’s relatively easy for us. It’s a big solid rectangle. It’s pretty flat. The surface itself is not that complicated. But using it as a storytelling device, when it’s sort of a 10:1 ratio the wrong way? That’s great for rockets. But the story we want to tell ultimately is not just the rocket launches. It’s the full Apollo 11 story. So we were challenged by that, creatively. How do we tell that story?

And then the other challenge was, you know, everyone also knows what happens in the story. “Are they going to make it or not?” We know. So we took a slightly different angle. We wanted to emphasize the idea of watching this in an audience as part of a huge group of people. There are all these amazing film shots of the crowds watching the launch, and crowds greeting the astronauts when they land, and crowds watching on TV around the world. So we were trying to work out what it felt like if you were in the middle of that crowd. Because, hopefully, there will be 20,000 people out here watching it on Friday and Saturday night.

Map of the viewing area on the National Mall
Source: Smithsonian National Air and Space Museum

You’ve corralled off this space on the National Mall to give them the correct perspective to see the full width of the show, too. You have screens on either side of the monument …

Exactly. And with music. The music is a really important part. We worked with an Emmy Award-winning composer called Jeff Biel, who has done things like HBO’s Rome and House of Cards. He’s made this amazing soundtrack, and you want to be up there on the mall to watch it. And that gives us an opportunity, as the monument is kind of epic, but the idea of being both near and far from it at once is kind of cool. It’s the idea of watching the rocket launch in the distance, as you would if it were somewhere like Kennedy Space Center. [The monument] is actually closer [than that] but you still get the effect of it feeling like it’s away from you. And then we make you feel like it’s gotten closer. That’s been a fun challenge for us. “Apollo 50: Go for the Moon” created by 59 Productions, conceived and commissioned by the Smithsonian’s National Air and Space Museum.
Photo: Evelyn Hockstein

And you can play with that scale. Some of the photographs I’ve seen showed the lunar surface being projected on the monument. So even though it’s that weird aspect ratio, you still have that scale, like you’re looking at something enormous.

The scaling and the zooming is our biggest challenge. And also a bit of a conundrum is that all this footage is amazing stuff. You could make a show that was — as someone else, I think, is doing — just playing the whole mission out in real time. It would be amazing, but that’s a 10-day show, not a 17-minute one. So how do we cut in this world so that we give a sense of how long it takes? We debated for a long time about the rocket launch. We had this idea of the rocket sitting on the launch pad. But when the rocket takes off, should it disappear off the top of the monument, or should we track with it? How do you use the monument to give the sense of space around the rocket itself? Is it all archival footage? Or did you do some CG recreations?

Everything on the monument is CG. And everything up on the mall — well, not everything, but most of it — is archival. That was another reason for using those screens. We could make them in a usable 4:3 aspect ratio, and we’ve got this amazing NASA archive footage that is just exquisite, taken from film stock that looks beautiful and vintage and of its time. Our whole graphical look up on the mall is sort of like you’re watching a lecture about Apollo 11 in the 1960s. We have this really inspiring document, which is the press release that went out for journalists at the time of the Apollo 11 mission, and it’s got these amazing diagrams of what’s going to happen and when it’s going to happen, and it’s all in that sort of almost typewritten, photocopied style. That was basically our Bible for this project, and every time we had a question we would look back at that press release and try to work out how they were communicating it back then and follow that idea.

What resolution are the images you created for the vertical aspect of the monument, from top to bottom?

The monument is just over 8000 pixels tall and 900 wide. It’s a pretty big resolution, and a pretty weird aspect ratio. It’s not the biggest we’ve ever done in terms of the number of pixels, which is a good thing because we want to keep render times down as best we can. A lot of our work we make right now, on site. Obviously we come to the site with a show. But we find that when you’re here and you put it on a building like this, you want to take the time to understand how it feels when you’re in the space. You can mock it up all you like in the studio, but it doesn’t quite work until you’re looking at it [on site]. But it’s been quite pleasing in terms of how much the texture of the brick of the building really helps to soften things. We’re not going for Hollywood-level CG here. We can’t, not for this type of show. But the building texture and color really helps to just soften the CG look in a way that makes it really readable. It’s obviously not the same, just looking at photographs, but the photographs I’ve seen make this look really amazing, like you nailed it.

It’s cool. We’re really pleased. It does look great. And the photographs are pretty accurate, actually. We’ve got a lot of brightness on the monument. We’ve really stepped up the projection there and we have probably more than we need, but in a way it helps to punch it up and it also means we can supplement with lighting. We have a big lighting rig. The inspiration was the Saturn V on the launch pad waiting to go over the night before launch, and they’ve got this huge floodlight lighting it. Here we’ve set that up with some floodlights around the monument. But of course we’re not actually letting them hit the monument during that scene, otherwise they’d wash out the projection entirely. So it’s sort of a game of angles. If you’re right by it, it’s confusing because the beams don’t seem to be touching it at all. But when you’re in the viewing position, it looks like they’re lighting the object, which really helps the effect.

How many projectors are you using to get the brightness of the program where you want it?

We’ve got 24 30K [lumens] projectors at the foot of the monument, and we’ve got another eight 30k projectors at front-of-house for the screens on the mall. They’re big, 30k laser projectors, so they really are punchy.

You’re making it sound like this is well worth the trip down to see.

You know, this probably isn’t going to happen again. The Smithsonian team that commissioned this actually passed a joint resolution of Congress and the office of the president to allow us to do this. You can find it online.

I read something about that. Because it’s a national monument, there was a question of whether you’d be allowed to do the projections.

Exactly. Like I said, the once-in-a-lifetime nature of this is pretty cool.

Anything else you want to talk about before I let you get back to work on this?

Not really. Just that the fact that the Smithsonian National Air and Space Museum came to us and commissioned us to make this is really indicative of their forward thinking. They’re doing some really cool stuff for this program, and it’s quite different from what others are doing. I love their unconventional and confident approach, and we’re so grateful to them for giving us this opportunity.

For more on “Apollo 50: Go for the Moon,” visit the project page at 59 Productions.