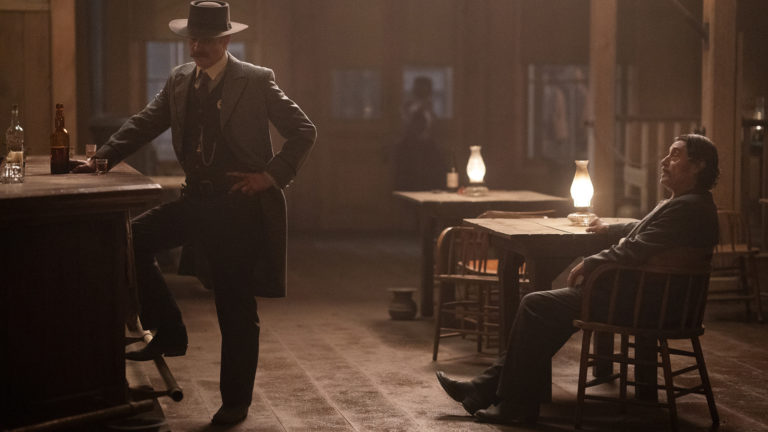 Cinematographer Tony Miller had never shot a single comedy when he interviewed for and was swept up into the production of Phoebe Waller-Bridge’s tour de force, Fleabag. Based on her one-woman show of the same name and co-produced by BBC Three and Amazon Studios, the series returned for a second season this spring with an even steeper roller-coaster ride of hilarity, connection and cringe-worthy moments of bad behavior. His choice, shooting mostly handheld on the Alexa Mini, was to make it look both cinematic and simple, although he admits it wasn’t easy to shoot at all.

We grabbed Miller on the phone after a long day on set filming an episode of Amazon’s gothic detective fantasy series Carnival Row, which debuts August 30. We talked about his immediate connection with Fleabag‘s star and showrunner and how the camera, itself a main character, helped deliver the show’s message and sell its signature Fourth Wall-breaking format.

Tony Miller: The first season was shot as a sort of one-off production, then we added quite a few scenes to it. I basically shot the whole lot from the beginning. This season was seven weeks.

Did you change up your camera kit for the second season?

No, I didn’t. I wanted it to be anamorphic and shot 2.35:1. But comedy ain’t my bag; I’ve never shot it before. We didn’t want this to be comedy, we wanted it to be cinematic. So choosing a 2.35 aspect ratio seemed the right thing to do. If I look to the people who’ve shot comedy who I admire, like Woody Allen, Wes Anderson, and the Coen brothers, they all shot 2.35. You have multiple relationships within the frame. I really wanted to play against the genre and make it cinematic. And there was another reason for that, too, which is, Fleabag herself does these ghastly deeds, so we really wanted it to have a naturalism because we wanted all our audience to relate to it themselves. We wanted them to see themselves in this character, and in her behavior, and her neuroses and psychotic behavior at times, so in a sense, it was a contradiction of wanting it to be cinematic and also wanting to be very close to the characters.

How did lighting play into those choices?

To achieve that naturalism, I avoided any form of theatrical lighting whatsoever. I also operated the camera myself, because I wanted us to feel ferally close to Fleabag every time she breaks the fourth wall.  I knew I had to really feel it emotionally and hence I did two things: I decided that it had to be 100 percent handheld, which Harry (Bradbeer), the director, and Phoebe both thankfully backed up. Just about every shot is handheld; there are three Steadicam shots in the entire series. Secondly, that I must light and operate, despite what the union said, because this was a show where I had to be emotionally engaged all the time with the camera. The chemistry and beautiful dance that arcs in this season between Phoebe Waller-Bridge’s Fleabag and Andrew Scott’s hot priest is simply divine. It just crackles with intensity. What was important to you, Waller-Bridge and the director when capturing those particular scenes?

I’m very close to Phoebe on two levels. As a person, she is just so generous and empathetic. She wanted her co-stars to have as much time as they need to make it work. She would always let Andrew Scott do 10 takes and then just do one herself because that’s all the time we had left. But because we’re close, I also understand emotionally what she’s trying to do. And I think I did from the get-go. That really helps me light around the characters, and I can literally light around the emotions that are often not said. The second thing is, again, we’re breaking the fourth wall. Phoebe as Fleabag is having a relationship with the camera — and to be clear, not with me but with the camera — and that relationship she has with the camera is at the core of much of series two. In the end, she tells the camera to stay and not follow her. The camera is her shrink and her alter ego, so I wanted every time she turns to me that she look absolutely radiant and at all times I’ve captured it all beautifully. I shot Phoebe in tests from all different lenses and from different heights and ways of lighting her. I did loads of tests on Phoebe’s face, so that I kind of have a shorthand of where to be at the best time when she turns to face the camera. I wanted it to look natural and simple, and it’s not. And I think it’s something I’m very proud of. I found Fleabag harder to shoot than Carnival Row, even though Carnival Row is a massive show, one of the biggest I’ve ever done in my career. But this was hard because it was so sensitive and it relied so much on very careful emotional nuances from Phoebe that I had to pick up as the other main character, the camera. So it was very exciting to shoot, too.

What were some of the lenses you sampled during those early tests?

I tried all of them, really. I ended up using the Cooke Anamorphic because they had a contrasty, good-looking feel to them. I used a little bit of diffusion, but that was it. And the rest was all in the lighting, in terms of trying to strike this balance between being naturalistic and not heavily backlit or using hardly any backlighting at all, and yet still giving it that cinematic look. The audience experience has to feel, immediately, this is a movie. But on the other hand, it has to feel like real life. We have to see our own behavior on the screen. I remember being so embarrassed when I fancied this guy, so I recognized this family’s dysfunctional trauma. And those are the things that I think work because they’re universal for all of us.

What else did you do to prepare for production?

I spent an awful lot of time reading the scripts. That’s an essential part of understanding what Phoebe is after, both the text and the subtext. Sure, the technical experience kicks in, but really understanding the scripts helped us do a lot of things bravely that were pretty tricky. For example, when she’s in the confessional booth, we tried to shoot that as one shot. She’s at her lowest point, almost, and confesses all this stuff that is shocking. If we’d put lots of cuts in it, it wouldn’t have had that impact. Thoroughly understanding where we needed to go helped me encourage that kind of choice, for example. Another example is the scene in Claire’s office. Those long shots between the two girls where we don’t really cut are all handheld. What’s so exciting is that Sian Clifford, who plays Phoebe’s sister, Claire, is such an amazing actor. We’d do these takes and you’d get to take four and realize, every single one is phenomenal. I got very tired, of course, shooting handheld for seven weeks confidently all day through multiple takes. But I had a brilliant crew round me. How did you work with Phoebe and Harry on set?

We’re very much an ensemble. In addition to being very generous with other actors, Phoebe is also very clear about what she wants and was very much the showrunner and person in charge. Harry helped her with performances, but she’s really running the show. It is a team effort and Harry is very collaborative as well. We sort of work it out. If occasionally things don’t work, we’ll try something else. Phoebe is a force of nature, and she’d be rewriting it every night, then coming on set and performing it. But she so inhabits that part. She’s also so kind and empathetic and just treats people very, very well. She’s a superstar. There’s no one like her. Consequently, there’s a great vibe on set at all times.