Working with Michael Mann, Lighting for HD, and Going for Deep Focus

Public Enemies, the John Dillinger biopic directed by Michael Mann and starring Johnny Depp, Christian Bale and Marion Cotillard, is one of the summer’s most hotly anticipated films. The feature pairs Mann with his frequent collaborator, cinematographer Dante Spinotti, ASC, AIC, who also shot – on 35mm film – Mann’s The Insider (1999), Heat (1995), The Last of the Mohicans (1992) and Manhunter (1986). This time, having had good experiences with the three Genesis-shot features already under his belt (2007’s Slipstream and 2008’s Deception and Flash of Genius), Spinotti shot digitally, using the Sony CineAlta F23 camera system. Film & Video caught up with Spinotti in Australia, where he is prepping for another F23 project, The Chronicles of Narnia: The Voyage of the Dawn Treader, directed by Michael Apted.

I understand that Mann originally thought he might shoot Public Enemies with film. What convinced him to stick with digital acquisition?

At the beginning, Michael Mann was considering shooting film, doing a more traditional approach. Then we did a set of tests and the digital camera responded very well and was slightly sharper than Super 35mm, so we saw the sharpness of the image wasn’t a problem. Then we looked at the potential that the digital camera gave us. First, you see what you’re doing right away. Artists who write or paint, all these people see what they do. Even if you write music, you can listen to it and make adjustments. You have time to think. Not so in making a movie. The final product is based in the fundamental decisions you make in the last two minutes before you roll the camera. With traditional photochemical film, you could say it’ll look like this or that. But it’s not like seeing exactly what you’re photographing. So that’s one major objective.

Also, the way the digital camera sees in the shadows is great, especially in a case like Public Enemies where you’re aiming for a very strong realism. That means you can light in a way that the audience is participating in an event as opposed to looking at something that’s constructed and lit so the film has a look. It’s a very different approach. This is also because the camera can be on the shoulder of the operator, so the operator is like a person looking at what’s happening. Because of the elasticity you have in lighting, especially in the darkness, you don’t need to use the kind of a lighting that depends on spotlights and traditional Hollywood lights. You can work with existing lights and adjust them. 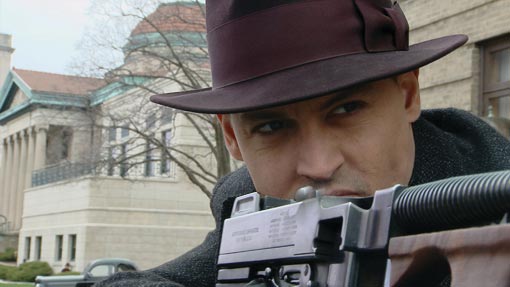 Why not go with a digital camera you’d already used? Why did you decide on the Sony F23 for Public Enemies?

Michael likes depth of field, images with deep focus, and that camera has a chip that’s more like 16mm that gave us that depth of focus. It’s the same reason why I chose the same camera for the film I am going into now, The Chronicles of Narnia. The depth of field works in our favor. The camera also has an advantage in the sense that it is much more elastic. You can adjust gamma curves and gain for incredible control over the image. You can also shoot much bigger energy in the sense that you can have a zoom lens and the camera can move around in a quicker way.

In addition to the three F23s, we also had Sony 950s and an EX-1, which is a very small camera, very compact, so it can be handled in a simple way. We took the 950s down to the body, with the recording deck attached by cable. Any interior car shots or energetic Steadicam shots of bank robberies, would use the 950s in this way. 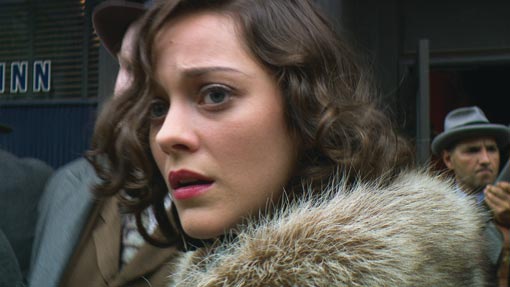 Co-producer Bryan Carroll on the Technology Behind Public Enemies

A turning point in the career of Public Enemies producer Bryan Carroll came when he worked as a film and visual effects editor for James Cameron on Titanic. “That’s what sparked my interest into shooting movies digitally from script to screen,” he said. When he met Michael Mann, the director was thinking of shooting the night scenes in Ali digitally. “And that’s how I got involved with Michael, using what I had learned from many years in the digital realm,” he said. “I brought that in and started building a bullet proof system, knowing we would end up on film.”

What did you and Mann particularly like about the image you got with the F23?

Depth of field. Genesis is like 35mm. The F23 you can compare to 16mm. When you think about documentaries and other projects shot in 16mm, you have lots more depth of field. [And] the image is sharper with the F23 because of the digital technology, so there isn’t a loss of a quality in using a smaller format as opposed to the wider 35mm format or the Genesis.

The other reason is the zoom lens [lenses used included Zeiss DigiPrimes and the Fujinon T1.8 zoom] on the F23 has an f-stop of 1.9 or 2.1, so it transmits a lot more light. It’s comparable to a 35mm lens. So that basically, no matter where you’re shooting-street exterior or dark interiors-you can keep the zoom on the camera because it’s as bright as the prime lens. It allows the operator to trim the shot and tweak it. That’s one of the main reference notes of today’s filmmaking: most of the time the shots are correctly trimmed to the exact frame needed. In the past, you’d see more conservative kind of framing because you didn’t have the agility of moving the camera that quickly.

Michael likes to shoot even dialogue scenes with a lot of kineticism and athleticism, so that was another reason [we went with the F23].

How much of the film was shot handheld?

Quite a bit. The camera was moving quite a bit, over the shoulder with medium to long lenses to capture dialogue. It was hard work for all the operators, Lucas Bielan and Roberto De Angelis.

What was your lighting package?

We worked with set decorator Rosemary Brandenberg and production designer Nathan Crowley with the gaffer Bob Krattiger and myself. We would work out some practical lighting, like a chandelier or table lamps or floor lamps, lighting that was very similar to the truth. In 1933, the areas of darkness were much wider than they are now. In those days, between a dim streetlight and another dim streetlight was a big space of darkness. Having a digital camera allowed us to deal with those things in a different way.

We had one gun battle at night where there’s a car chase through the forest. To light the road, we used two Bebee Night Lights, which covered a lot of the road throughout the chase. For a long stretch of road, we changed the headlights in 10 of the period cars to put more powerful headlights controlled by a dimmer. When we look at them from the front, we brought the lights way, way down. They were actually dim. When we shot inside the car, we used the headlights to light the road. And then we used Diva or Vista lights on the bumpers. Far away, we’d have HMI lights in the sky so you see the silhouette of the forest. These combos of lights were sufficient for an incredible action scene of a car chase. We also did a lot of tests with the glow from the machine guns shooting. They emitted a lot of light from the front of the barrels, so they were all practical and would light the scene, or at least the faces of the actors.

How did you do dailies?

Michael likes to do a basic color-correction inside the camera itself and then we would obviously do a color-correction on the side monitor. The signal we were recording was already very much in the direction of the look of the scene we wanted.

What can you say about post-production?

With the digital camera, you know what you’re going to get into when you get into post. You don’t say, “We’ll fix it in post. ” You say, “We make it in post and fix it in the camera.” You know the potentials you have in post, so you work with your camera so you can reach those potentials when you go into post-production.

The DI was with Stefan Sonnenfeld at Company 3. Michael has been working with him since he started making movies there. It’s a very precise combination of how the DI equipment is lined up at Company 3 and the way the lab reacts. I was there for a couple of the weeks of the DI, but the whole process lasted for a long time so I wasn’t able to follow the whole operation. I was also there for early film transfer tests.

Final thoughts on using the F23 and on digital production in general?

You may use different formats for different movies The ARRI D-21 works for anamorphic and is good for exteriors. You can also go back to film. Why not? Film has some remarkable advantages in recording highlights as opposed to digital technology as it is now. You can adjust different cameras and make different choices depending on the film. As far as the quality of the digital images, we’re going through some very interesting 3D experimentation in filmmaking, which I think will be a thing of the future. Stereoscopic 3D in this age is very effective and beautiful and is interesting for taking you more inside the story, and that will take place with digital. I suspect these cameras, the F23 and Genesis, will continue to make steps forward in terms of more sharpness, tonal range, recording of the highlights and so forth.

Once you make tests and decide which camera you’re going to use, you don’t look back. You make the camera be a part of the movie. I think Public Enemies worked out in an interesting way. Even the aspect of doing a period film with modern technology was interesting.