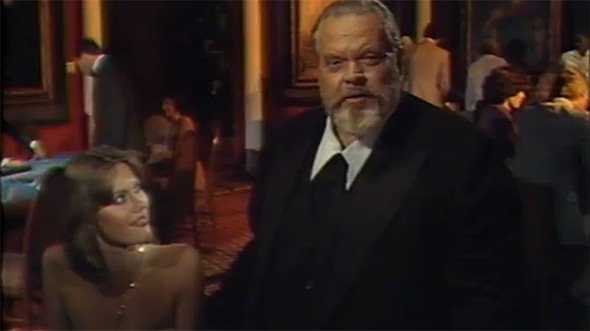 Hey, scholars and archivists — don't despair! If Too Much Johnson can be discovered resting in a warehouse in Pordenone, Italy, there must still be some hope for other legendary lost films.

Film buffs will immediately recognize the distinctively titled Too Much Johnson as one of two films the wunderkind director Orson Welles made before embarking on Citizen Kane, the project that would make him a Hollywood legend. Welles's first film was "The Hearts of Age," an eight-minute short he made as a teenager at the Todd School for Boys in Woodstock, IL. But his second film was Too Much Johnson, which he created when his Mercury Theatre troupe mounted a stage production of an 1894 William Gillette comedy of the same title. Welles intended the film, shot in and around New York City, to be presented not as a standalone work but as silent introductory material for the live stage production that would be played with a band and sound effects artists performing behind the screen. Orson Welles on location for Too Much Johnson in 1938.

Well, the production played a few shows in Connecticut in 1938, but it never opened on Broadway — and the film was never completed or screened. The actor John Houseman described Welles's suite at the St. Regis Hotel in Manhattan, which doubled as a cutting room, as full to overflowing with strips of motion-picture film — about 25,000 feet — as Welles struggled to cut the project together. Welles later recalled finding the footage again, in his Spanish villa, and making plans to send a newly edited version to the actor Joseph Cotten as a birthday present. But it was not to be. A fire destroyed Welles's villa and Too Much Johnson, printed on highly flammable nitrate stock, along with it.

According to the National Film Preservation Foundation (NFPF) in San Francisco, a 35mm nitrate workprint of Too Much Johnson was discovered earlier this year by Cinemazero, an organization that puts on Pordenone's annual silent film festival, Le Giomate del Cinema Muto, in cooperation with the Cineteca del Friuli. Realizing the historical significance of their find, the organizations asked the NFPF and the George Eastman House in Rochester, New York, for help preserving the film. (The preservation effort was funded by the NFPF, a nonprofit charitable affiliate of the National Film Preservation Board of the Library of Congress.) Too Much Johnson will have its world premiere screening at the Pordenone festival on October 9, and will next turn up on October 16 at a North American premiere screening in Rochester. If funding can be secured, the NFPF plans to present the film for Internet viewing later in 2013.

Too Much Johnson never reached final-cut status, but Welles scholars have long contemplated what it might have taught them about the director's nascent cinematic style. "It will tell us an enormous amount about his visual sensibility and, indeed, about his theatrical instincts," said Simon Callow, a British actor and noted Welles biographer, in a prepared statement. "At last we can really get a sense of what this recklessly inventive production for the Mercury Theatre might actually have been like had the film been used." Curious what the play is actually about? Scroll all the way down to read the NFPF's plot summary.

If Too Much Johnson can be found, might there be a chance that someone, somewhere, will one day come across the lost reels of Welles's later film The Magnificent Ambersons? A forgotten copy of Tod Browning's lost Lon Chaney film, London After Midnight? A misplaced print of the Theda Bara Cleopatra? Keep hope alive. Too Much Johnson: Plot Summary

The tangled plot of William Gillette's Too Much Johnson (1894) takes its inspiration from the French marital farce La Plantation Thomassin by Maurice Ordennau. For the Mercury Theatre version of Too Much Johnson, Orson Welles told the backstory for each of the three acts in movies and pared down the stage play to a lightning-paced screwball comedy, heavy on repartee.

The story follows the misadventures of Augustus Billings, who has been philandering in New York City under the name Johnson. To cover his tracks, Billings has told his wife that he makes visits to Cuba to supervise his plantation, assuming that a plantation-owner friend there would vouch for him in a pinch. But on the day when his dalliance with Mrs. Dathis is discovered by her wronged husband, his own wife decides to join him on one of his regular "Cuban trips" and bring along her mother. Billings is forced to hop the Cuba-bound ship, to which Dathis tracks him through photographic evidence — the top of a keepsake portrait ripped from his wife's hands. As Act I begins, we find another unhappy group on shipboard: Leonore Faddish, facing an arranged marriage with a Cuban plantation owner also named Johnson, along with her father, Faddish, and her stowaway sweetheart, Mackintosh.

Arriving in Cuba at the start of Act II, Billings learns that his Cuban friend has died and that the plantation's new ownewr is the same Johnson who is awaiting his mail-order bride. Billings's lies escalate as he orchestrates ruses to hide his identiy. As the confusion mounts, the plantation owner mistakes Mrs. Billings as his bride, Billings's mother-in-law as Billings's wife, and the Faddish trio as poor relations — and then Dathis arrives, ready to duel with the plantation owner, whom he assumes to be his wife's lover. (All this leads to a Billings-Dathis-Johnson fight offstage, which is the centerpiece of the Mercury movie before Act III.) After a rushed ceremony—which some take as a wedding while others take as a real-estate sale—Billings makes his escape, along with the women and Mackintosh. Duped, the abandoned men—Johnson, Faddish, and Dathis—howl, "Find Billings!" Curtain.