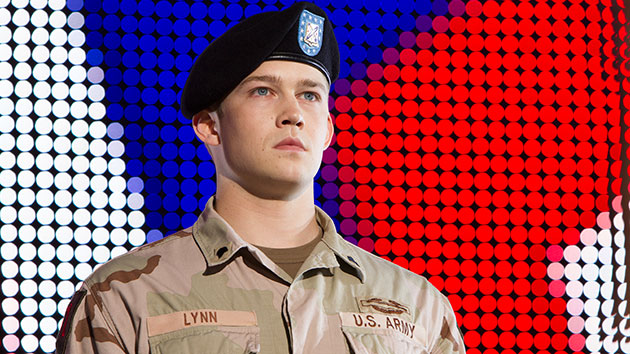 The most physically uncomfortable viewing experience at the New York Film Festival, which runs through October 12, is almost certainly Farewell to Language, the new film by the 83-year-old Jean-Luc Godard, one of the directors who revolutionized world cinema in the 1960s as a leader of the French New Wave. Godard's later work is polarizing, with many viewers either praising the unconventional films for what they appreciate as Godard's intellectual passion and eye for beauty or condemning him for a perceived stubbornness and didacticism. "Farewell to Language is chaotic and mad, with longeurs," writes critic Peter Bradshaw in The Guardian. "But it has its own baffling integrity and an arresting, impassioned pessimism."

What it also has is 3D. And that's where the discomfort comes in. Godard is not content to use 3D technology as intended, simply to create a convincing illusion of depth. No, he wants to experiment with the technology, draw attention to it, test its boundaries, and see what happens when the image falls apart completely. In Farewell to Language, he uses it as one more way to help tell a story dense with literary, historical, and cinematic allusions,

It's sometimes said of daring filmmakers that they break all the rules. Well, in this case, Godard really does. Farewell to Language does things with 3D that would get a Hollywood stereographer fired a dozen times over. He yanks your eyeballs around. It's a challenging and exhausting experience. And yet film professor David Bordwell gushes, "Godard's Adieu au langage is the best new film I've seen this year, and the best 3D film I've ever seen." Watch the trailer, below (in 2D only, unfortunately), to get a sense for the film's aesthetic, then read on for a quick look at what Godard gets "wrong" in 3D — and what his disregard for the rules ends up revealing about how stereo really works.

1) He does not keep a clean frame. By common stereographic standards, Godard's frame is a mess, with window violations galore — objects cluttering the edge of the picture, appearing in front of the screen plane even though they're cut off by the edge of the stereo window. These edge violations create a visual paradox that's difficult for the eye to process. What's more, the awkward placement of objects in the foreground of some 3D shots means that significant portions of the background are occluded differently between the left eye and the right eye, making for uncomfortable viewing. (I kept having the impulse to move my head slightly to one side in order to see around an object.) These shots show how incredibly important it is to keep your frame clear of extraneous objects, especially in the foreground, to avoid annoying viewers and drawing attention to the stereo process. (At the press screening I saw, there was also a pronounced red shift between the left and right eyes that added to my sense of disparity between the stereo views, but I'm assuming that was a problem with projection and not a conscious decision.)

2) He embraces low-quality cameras. Some of the shots are quite clean and clear. Godard used pro cameras from Canon and other companies (Canon Europe set up a whole minisite dedicated to the project) that are capable of delivering a very serviceable cinematic picture. But those shots are some of the least evocative images in the film. He also employed consumer and prosumer cameras (the credits list cameras from GoPro and Panasonic's Lumix line among others I was too slow to jot down) that deliver rougher edges, smearier colors, and generally a more lo-fi stereo effect. In some cases the colors have been quite obviously tweaked, to surreal effect, drawing even more attention to the harsher video-y edge of the pixels. The 3D effect is less precise but still quite pronounced; the resulting images take on a dreamlike quality.

3) He gravitates toward deep focus. Stereo films often use depth of field effects to create cues telling the audience where its eyes should be looking in the frame. If the background is completely out of focus, a viewer will tend to look at foreground objects that are in sharp focus (and generally converged near the screen plane) and vice versa. But many shots in Godard's film have extended depth of field—probably owing in part to the use of cameras with small-format sensors—and his camera is often placed so that it peers through windows or panes of glass, emphasizing the multi-layered quality of the already expansive scenes. One shot is photographed through a car windshield as raindrops hit it and the wipers swish back and forth. You can clearly see the trees, clouds and sky outside the car, but you can also converge the drops and splashes of water hitting and smearing against the glass in the foreground of the scene if you cross your eyes strenuously enough. It's not exactly easy to watch, but the pronounced stereo effects across the full depth of the image, from the car's interior to the wide exterior outside, give the shot a hyper-realistic quality.

4) He rips the 3D image apart and then restores it in a single shot. This is the big one. Godard starts with a stereo image—a two-shot of a couple. When one of the figures in the shot breaks off and moves away to screen right, one of the cameras in Godard's stereo rig simply pans sideways to follow the action while the other camera remains in place, fixed on the first figure. The audience sees two different images simultaneously; if you're in the mood for interaction, you can "edit" the shot as you watch. Simply close one eye at a time, so that you choose which of the two images you see. It's a truly interactive film, and all you need is your eyes. Eventually, the second figure returns to the side of the first, and the camera pivots back into place, making the stereo image whole again. It's a highly satisfying effect — it reminded me of the moment in a piece of music when an unresolved chord finally shimmers into consonance. This is said to be the only moment among all the films screened at the Cannes Film Festival this year that inspired a round of mid-film applause. Later, he uses the same effect with what may be a nudge and a wink in a scene featuring a nude man and a nude woman on screen, so that you see the man in one eye and the woman in the other—unless and until you close an eye to decide which one you want to watch.

5) He uses stereo to elevate the mundane. To date, 3D has been deployed mainly for spectacle filmmaking — rock concerts, horror movies, superhero sagas, and science fiction and fantasy tentpoles. In Farewell to Language, Godard looks to make the ordinary picture extraordinary through the application of stereo depth. One shot simply depicts the long shadows of two characters cast across a road. The image would be banal in 2D, but in 3D it's dynamic — you see the road stretching gently away from the camera, rendered in full 3D, but you simultaneously see the actors' two-dimensional shadows, little moving pictures, cast by sunlight against the three-dimensional road. Later, you can see the shadow of the camera crane itself cast on the ground in one brief shot. Godard holds the images just long enough that you get the point.

It won't exactly be a different film if you catch it on video, without the 3D effects. But it won't be the same, either. Godard turns 84 this year, but he's still on the lookout for legitimately new ways of seeing.