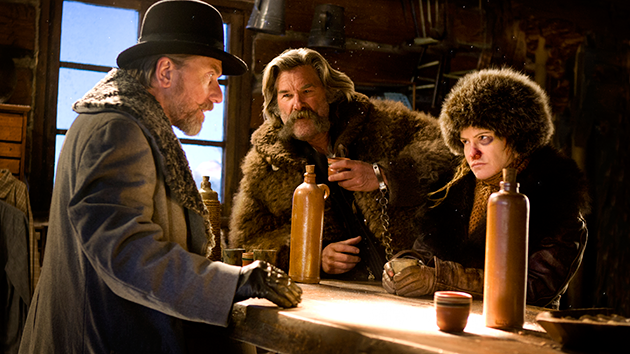 It's another discouraging week for fans of celluloid, as word from Japan is that Fujifilm will stop making movie film early next year due to a general lack of demand. (The Japan Times reported that the company plans to take final orders from studios worldwide, and then cease production in the spring.) But film fans do have something big to look forward to — director Paul Thomas Anderson's The Master, the first narrative feature shot in 65mm in over a decade, opens today in a handful of 70mm engagements.
The new Samsara by nonfiction filmmaker Ron Fricke (Baraka) was also shot in 65mm, but no 70mm film prints were struck — only 4K DCPs. In a note to viewers, writer-editor-producer Mark Magidson calls this "the best possible viewing experience," a claim that film purists will, no doubt, dispute. But Anderson is reported to have pushed hard to identify theaters that can still show 70mm prints, entice them to book the film in 70, and (not least of all!) convince distributor The Weinstein Company to make enough prints to service them.
As a result, if you're in the New York or Los Angeles areas, you can go see The Master, right now, in a glorious 70mm print. Starting next Friday, September 21, the film will expand to 70mm theaters in Austin, Texas, Boston, Seattle, Oakland, CA, and Silver Spring, MD. Check the list of 70mm engagements at the P.T. Anderson website to make sure you don't wander into a 35mm or DCP screening by mistake. (I was a little bit crushed to read that the Esquire Theater in Denver, where I saw 2001: A Space Odyssey and Lawrence of Arabia in 70mm some 20 years ago, is no longer able to exhibit 70mm, leaving Denver with no 70mm theaters at all.)
If you ask me, this is a little bit amazing: the opportunity to see a brand-new film photographed and projected on 65/70mm film stock at a time when the whole industry is making a wholesale transition to digital acquisition and exhibition. It won't be quite as good from a pure quality perspective as watching the IMAX 15/70 sequences from The Dark Knight Rises on a gigantic screen, but, knowing Anderson, the aesthetic experience will be quite different.
It's one of our best filmmakers working with some of the finest analog technology available in a digital age — how many more chances will you have to see something like this? If you love the old-school texture of film images, and if you live anywhere near one of these vanishing 70mm-capable theatrical venues, you owe it to yourself to make it to this one.

6 responses to “Film’s Not Dead Yet: See The Master in 70mm”