The Industry, and DSLR, Grow Up

Amid the hype and hoopla leading up to the camera's introduction at Paramount Studios on November 3, one fact seemed inescapable: the Canon EOS C300 camera will usher in a new era of simple, versatile, high-performance tools for filmmakers. It wasn't so much the tech specs of the new camera that dominated conversations around Hollywood this month but the changes it will bring to the industry and craft, as the bloated old ways of making movies and TV programs give way to a more minimalist approach.
For most of the world the minimalist approach to filmmaking has been the norm for some time. Compact portable lighting and versatile digital cameras have reduced crew sizes for film projects in most of the world as budgets have shrank and crew members wear many hats. With the advent of the Canon C300 a more cost-efficient approach will gain acceptance at the highest levels of the industry, disrupting the status quo and legions of specialist craftsmen who have dominated the Hollywood scene for decades.

The panel of cinematographer beta test shooters at Paramount on November 3 spoke of photographing their short films in three days, not three weeks, covering 50 to 60 setups per day, an astronomical number considering the high quality of most of the work presented. Several DPs, including Sam Nicholson, ASC, described the liberating feeling of shooting in almost total darkness with one or two LitePanels 1X1s and an iPad as their total lighting complement. 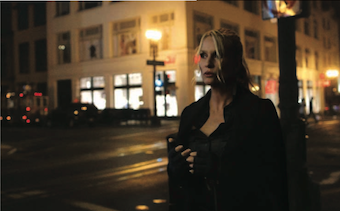 With its new single 4K sensor, 800% dynamic range, and extreme low-light capability, the Canon EOS C300 promises a more economical streamlined approach to moviemaking at every level. Even at a remarkable 20,000 ISO C300 images still looked quite pleasing on a sixty-foot screen. Many shooters will use a more "normal" setting of 1600 for most shooting setups. Incredible. Click on the image to see a larger view in your browser.

At the Center of It All

Those images are a direct result of the camera's new 4K CMOS sensor: not repackaged from DSLRs but retaining the approximate Super 35mm aspect of the 7D. The imager and RGB breakout does not employ the traditional aliasing-inducing debayering process. Indeed, the bulk of Canon's R & D dollars appears to have been focused here; the C300's performance, resolution, dynamic range and low-light performance push it clearly and dramatically to the front of the professional pack.

The Canon EOS C300 is not intended to replace an industry workhorse like the ARRI Alexa. With wireless FIZ (focus-iris-zoom), superior ergonomics, and choice of output codecs including RAW, the Alexa Plus, at almost four times the price, is rugged as hell. The weight, heft and operational precision of the C300 are simply not in this league.

The C300 fitted with an EF or PL mount is designed to accept a range of optics, and thus accommodate users from avid enthusiast to the top-end professional. Like advocates of the RED, C300 shooters are looking for a large-sensor camera capable of producing very high resolution images suitable for big screen display; the difference here is the Canon is a complete camera and imaging system with integrated Lookup Tables, on-board processing of video, noise reduction, custom picture settings and all the rest.

While other manufacturers refer to scene files or some variation, Canon retains the custom picture settings reference from its DSLR line. The Video C setting is particularly noteworthy in the C300; it optimizes playback on consumer TVs by deepening the muddy or splotchy blacks typically found on cheaper displays. Since the video village on many sets these days often feature a large-screen TV, the Video C setting and an HDMI output that actually works are helpful additions. Canon has clearly put in a lot of thought into this camera and listened to pro users.

While the C300 features log recording, some shooters may be chagrined by the lack of RAW output. This is not an issue so much for me as some compression is almost always required in any workflow given the critical demands of the capture media, storage and one's general sanity. For most shooters the 50 Mbps 4:2:2 MPEG-2 recording format is quite ample, especially given the polished look of the short films presented at the Paramount event – all recorded to the long-GOP format.

Still, given the exigencies of digital cinema and data-heavy applications, the long-GOP format borrowed from Canon's XF cameras may seem rather anemic and more reminiscent of formats like HDV and AVCHD than a codec particularly well suited for digital cinema.

More problematic for some folks may be the Canon 8-bit recording and HD-SDI output. To be fair, Canon extracts a remarkable 12-bits worth of data for each pixel, a very high level of performance that the company describes as "the best 1080p 4:2:2 implementation in the business." Still, for most of us operating in the higher end of the industry, a ten-bit recording system like Sony's HDCAM SR, Apple's ProRes and Panasonic's AVC-Intra are pretty much the norm now; the additional bit depth will significantly improve not only color sampling accuracy, but color correction and grading later in post production. Since virtually every show originating digitally these days will require some color correction, the inherent benefit of 10-bit capture and workflow cannot be overemphasized.Ã¢Â€Â¨ 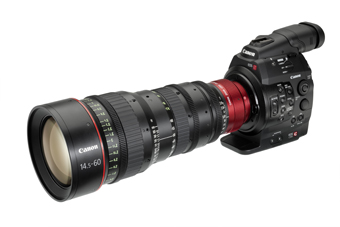 Canon has introduced a new series of lenses – the 14.5Ã¢Â€Â“60mm (above), 70-200 mm (below) and 30-300mm (top of page) zooms, as well as 24mm, 50mm, 85mm primes. With proper optics the camera looks fabulous on the big screen. Operational and theoretical issues notwithstanding, for many shooters this is all that matters. 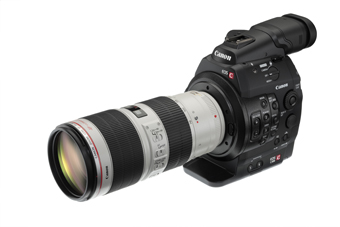 Notes from a Fan

The data load of the DSLR is necessarily limited by the lack of sufficient heat sinks or another cooling method (like a fan) to dissipate heat. Remember that excessive heat leads to excessive noise in our images, so effective dissipation is a major design consideration for camera engineers. In this respect the C300 features much more robust heat sinks than the DSLR and a silent running cooling fan to maintain a safe operating temperature around the imager. Like the Alexa, the C300 fan cannot be disabled; however, when it is running it is virtually imperceptible.

One scourge of DSLR video has been the matter of rolling shutter. Canon's Larry Thorpe, a legend in his own time, described the progress Canon has made on that front with the C300: "The rolling shutter effect is still there, as it is in most cameras equipped with a digital imager, but the effect has been minimized in the C300 by using more frequent and faster extraction of data from the sensor surface."

The prosumer C300 battery may also scare some shooters who would prefer a standard IPX or Gold Mount configuration. Batteries, cables and plugs account for perhaps 90% of equipment failures these days, making high-end professionals particularly sensitive to these potential troublemakers. It is why the Alexa Plus now features externally mounted user-replaceable BNC connectors. The twisting damage to a connector from a stressed-out cable has led to many crippling, career-threatening failures in the past.

The CF Media may also be problematic for some pros fearful of the card's fragile pin connector. Unlike Panasonic's mil-spec P2 card or even Sony's SxS card, CF media and the receiving slots are decidedly down scale, an unfortunate holdover from the DSLR that should be addressed in future camera incarnations.

With the runaway success of the DSLR Canon could afford to stage one helluva party to announce its entry into the Hollywood community. In this respect Canon enjoys a key advantage: the company manufactures the lenses that are, after all   what audiences really see and appreciate on the big screen – not imager pixel count, 4:2:2 color, or frankly whose sexy name adorns the side of the camera.
And there's something else. In an era of rampant fear among manufacturers struggling with the profound changes that affect our industry and the media landscape Canon chose to produce a brilliant new camera and embrace the future with gusto.

Yes. Yes. Yes. That is reason enough for a massive Hollywood celebration.

Summary: The new 4K sensor with revolutionary imaging is a shot across the bow of competing camera systems as Canon enters the higher-end feature film and commercial markets in a major way.Ã¢Â€Â¨