Ang Lee’s Taking Woodstock takes a turn away from the darker themes of his Brokeback Mountain and Lust, Caution, telling the story of Eliot Tiber (Demetri Martin), who wound up arranging for the Woodstock rock festival to take place on a farm in upstate New York. Shot in 35mm by cinematographer Eric Gautier, the light-hearted film captures the sunny tones of a summer in the Catskills. Film &  Video talked with Lee about hippie training camps, the influence of Jean-Luc Godard’s Weekend, and why he hasn’t yet worked with video.
Film & Video: How closely did you work with Eric Gautier in designing the film’s look?

Ang Lee: Very closely. From prep to the entire shoot, he’s the person I worked closest with. There’s a specific way of filmmaking I was aiming for. I wanted to break away from the studio system and return to a period style of filmmaking. It was a very revolutionary time in filmmaking. Of course, we’re making a contemporary movie as well, so it’s a mixture. We did a lot of talking about style and older techniques. Should we use an older camera or older film stock? Can we create this look with getting too fetishistic? During the shoot, we tried to go for very organic filmmaking. Sometimes, his thick accent made it hard, but I just love working with him. He’s one of the cinematographers who’s more of a filmmaker than a technician. We spent most of our tine taking about the drama of the film and how to help it. That’s more important than making it look good or look a certain way. I could spend more time choreographing the drama or working with actors.

What inspired you to use split screens?

The great documentary, Woodstock. It used them. Split screens were a period style too, so we decided to go for it. Very early on, I wanted to use it. Very often, I used two handheld shots put together. It was very much a documentary style. I also used a zoom lens, which isn’t a documentary technique but stems from that period. That was a tougher decision than the split screens. 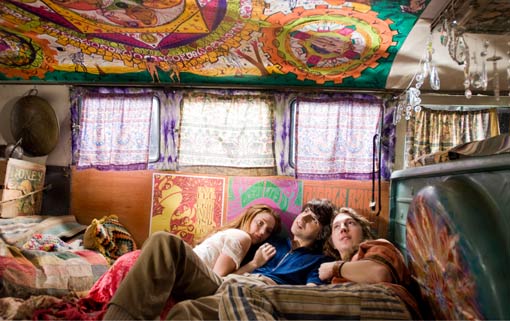 Did you have any difficulties sticking to the period? Were there ever any moments where things felt too modern or phony?

It was a constant judgment. If something felt phony, I just didn’t do it or cut it out later. If I felt like I was working for a stye, it was probably phony. For example, the zoom lens. Eric first wanted to use old zoom lenses. Back then, they weren’t as good as today’s. They start with a jolt. For a time, we thought that was a cool effect. Eventually, we decided it would be too phony. We used modern zoom lenses instead.

Although Taking Woodstock is set roughly around the same time as The Ice Storm, they’re very different in tone. Were you afraid of repeating yourself?

No, I think they’re a pair, like two different pieces of paper in the same book. Years ago, when I did The Ice Storm, I thought it was the hangover from Woodstock. They’re not too similar, but they have something in common.

Growing up in Taiwan, did you listen to a lot of American rock?

I was not a particularly hip kid. I was docile and studious. Taiwan was still pretty conservative. I would hear the top 10, like anywhere in the world. I didn’t know too much about Bob Dylan or Janis Joplin Just the Beatles.

Given the subject matter, there’s relatively little music in Taking Woodstock, especially the first half. Why’d you decide to use music with such restraint?

I did it pretty realistically. There are two things. In the book I adapted, Eliot never got to Woodstock. That’s his story. Second, only a small portion of people at Woodstock saw what happened onstage. The experience was looking at a stage from a distance, on acid, and having a good time with friends. That’s the real Woodstock. Most of all, “Woodstock” didn’t happen at Woodstock. It was a utopian ideal that went way larger than the stage, larger even than music. That ideal is my main interest. You can hear music more than vaguely. In reality, it was even more distant. I was sure that if I put “Woodstock” in my title, people would expect to hear lots of music or see a woman in a wig pretending to be Janis Joplin. That was never my intention.

Are you attracted to making films about places and times you weren’t able to personally experience?

Yes, but I have to be curious about them. There are things I’m more interested in than others. I’m interested in times that had an impact on our lives and the world. Also, I’m looking for something fresh or a different angle. I want to look at history and see how it affected us. That’s fascinating to me.

Would you ever shoot a film on HD video?

Not yet. Digital cameras are attractive, but since Hulk, people have been trying to talk me into using one, especially on movies with a lot of visual FX. I think the lens doesn’t quite match up to analog cameras. Also, I feel there’s more life to a film image than electronic dots. Digital cameras are stable and reliable, but somehow less lively than film stock. Maybe I’m too old-school. Step by step, I think video’s catching up. Only on my last movie did I do post in digital. Digital cameras are more convenient, but the quality isn’t as good. 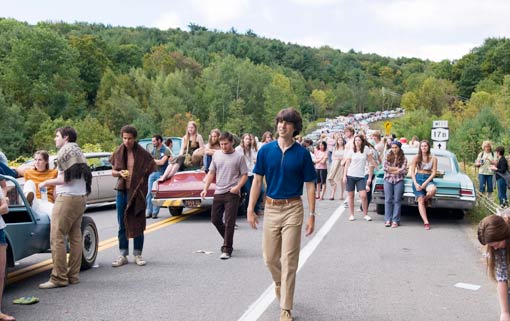 How difficult was it to shoot the crowd scenes, particularly the one where Eliot gets a ride down the road from the cop?

They’re difficult and challenging, but also fun. I liked directing hundreds of young people and telling them how to hold themselves. For the core extras, we had a hippie training camp for two days. There was reading material, watching documentaries, listening to lectures and camping. That was fun. We spent an entire day rehearsing that scene. The focus pulling had to be precise. We spent half a day shooting. If you’re prepared, it’s not that hard. It wasn’t a burden. I was looking forward to doing that scene. It’s meant to refer to Jean-Luc Godard’s Weekend. In the script, we called it “the Weekend shot” unabashedly.

What was the most challenging scene to shoot?

The crowd scenes. I tried to approach them with a mellow attitude, but you’re fighting for time.

Did you feel any need to stick strictly to the facts in telling Eliot’s story?

No, I wanted to make the best possible movie. Eliot can say whatever he wants in his memoir. There are other memoirs of the period. His story is a tiny part of what happened. We also drew on other people’s accounts. The movie character isn’t entirely true to him. It’s very hard to portray something big, that’s been romanticized and demonized over the last 40 years. What happened onstage becomes relatively unimportant. I was very grateful to Eliot’s book for giving an angle to watch the event. It’s manageable but still the big ideas come through. I was more interested in the utopian elements. It’s an act of balance. His book offered a lot of detail that I couldn’t imagine. I took a lot from it but didn’t feel obliged to take everything.

What film would you say is your most personal?

Lust, Caution. Of course, I never was a woman betraying my country and all that, but it was my most painful film to make. It took the most out of me. I’m not saying that makes it good or bad. It’s not a way to judge it. It’s not my favorite, but it feels the most personal.