Flash is a well-known tool but doesn’t usually come to mind as a way to animate an entire feature film. But that’s what director Ari Folman did, constrained by a tiny budget but certain that animation was the only way to tell his story.

Stylistically, a documentary is ordinarily quite different from animation. But filmmaker Ari Folman has a different point of view. “Who decides what is more true?” he says. “A digital image that you see on a screen that is made out of pixels and dots and lines, or a drawn one, both of them are speaking in the same voice? Who decides the video picture is more real than an artist who drew the images for four months?

Folman admits he was “clueless” about the challenges that awaited him when he tackled an animated feature. His studio, Bridget Folman Film Gang (named after his dog), consists of a very small team: eight animators, four illustrators, one After Effects artist and one editor.

Though keyframe animation was an impossibly expensive route, Folman was determined to make the best of a toolset dictated by dollars and cents. “We had to take the low-budget issue as an advantage and to invent something that is different so when you look at it, you don’t say, oh I’ve seen this before,” he says. “If I’d had $1 million, I would have done more 2D classic animation and it would have been a better film. But if I’d had $10 million, it would have been a completely different film but not a better one.”

Most importantly, Folman is emphatic that the film was not rotoscoped. “I respect rotoscoping and I even like Waking Life, unlike my animators,” he says. “But, for me, rotoscoping has a big problem in conveying emotions. You see the technique, you see the drawings, and that takes your focus. If this film had been rotoscoped, it would have been hard for the audience to get emotional with the characters.” 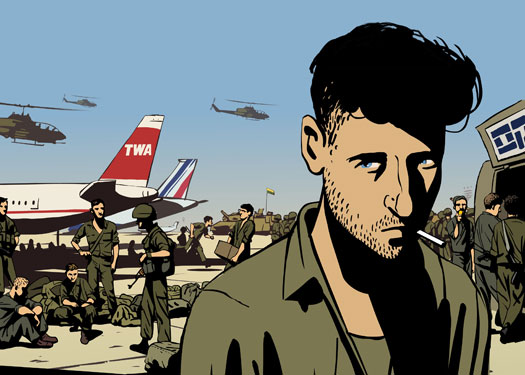 The first step was to videotape, on a sound stage, the interviews and even bare-bones representations of the war re-enactments. “We tried to dramatize those scenes in the studio as much as we could,” says Folman. “We’d sit in two chairs with a plastic grill in front and pretend we were in a car.” One thing Folman was firm about was recording crystal-clear sound, without distractions of a cinema và©rità© style recording.

Once the movie was videotaped, it was first turned into a storyboard and, from there, an animatic. “We made the animatic very precise,” says Folman. “I wanted to minimize as much as possible any mistakes that could appear at the animation stage.” The animatic was screened multiple times, to see if the drama was working and to lock in the story.

The next step was to draw 3,500 keyframes at crucial points in the movie; art director and illustrator David Polonsky drew 75 percent of them. From one keyframe to the next, the animators (director of animation Yoni Goodman, lead animators Tal Gadon and Gali Edelbaum and animators Neta Holzer, Asenath [Osi] Wald, Sefi Gayego, Orit Shimon, Zohar Shahar, Lilach Sarid and Barak Drori) moved the keyframe in classic cutout style. 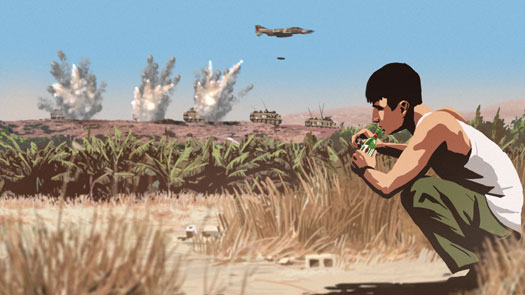 Autodesk Maya was used only for spectacular turning points in the film: one scene goes from snow in the forest, up into the sky and then down into the boat. “Most of them are the more fantastical shots,” says Folman. Maya artists were Wald, Michael Faust, Asaf Hanuka, Tomer Hanuka and Ya’ara Buchman.

The design, by Polonsky, played a key role in developing and creating the film. In fact, Folman goes so far as to say “the design dictated a lot of the animation.” “I was obsessed that the characters would really have a realistic style,” he says. “That meant more detailed faces with contours and wrinkles, etc., which made it more complicated to animate them. David also created the dream style, for the surreal scenes, which is not less detailed but more free in terms of proportions, colors and basic design.” 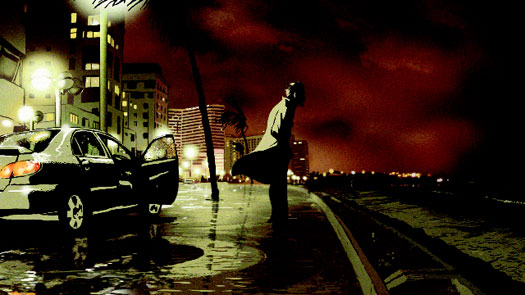 To achieve realism in the environments, says Folman, the team took photographs and then carefully added all the background details. To achieve realism for the faces and bodies, animators broke them into sections and sub-sections. The face was typically divided into 8 sections and each section into 15 sub-sections. This didn’t work well for the lower part of the body – slow movements weren’t realistic. “In many places, we did the lower part of the body with frame-by-frame classic animation,” he says.

The film’s dramatic conclusion takes place in what Folman calls “hard-core documentary” style. “It’s in a monochrome color design between orange and black – melancholy and depressing, and less detailed in the characters,” he says. All of the styles were tied in, stylistically, to the “super scene,” the vision of the three soldiers in the sea that repeats three times.

Production manager Yael Nahlieli handled the workflow, among other tasks, but Folman notes the production was too small to require any fancy digital-management system. “Every day, we knew the frame count of every animator,” he says. “We knew everything that was going on.”

Working with such a small crew had its creative advantages, says Folman. Unlike a big production, where dozens of people are involved in creating every frame, this film’s animators can claim ownership of entire sequences. “I love this very hands-on style,” he says. “Animators could go to the premiere of the film and tell their spouses, ‘I did that alone.’ That’s incredible. Animators are strong in one area and weak in another, so we tried to use their preferred talents in the right scenes to take advantage of everything they could give us.”

The decision to suddenly switch from animation to video footage at the movie’s conclusion was, says Folman, “always the plan.” “I just wanted to prevent a situation where someone somewhere would walk out of the theater and think it was a cool anti-war movie with great drawings and music,” he says. “I wanted to put it very clearly that this massacre happened – more than 3,000 people were slaughtered and most of them were kids, women, old people. That video footage puts my story in place, the design and animation style in place, the story in place, and the audience in place.” 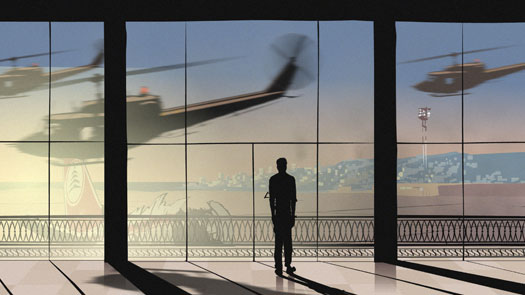 The graphic-novel version of Waltz with Bashir will be released in the U.S. in January. In the meantime, Folman and his Bridgit Folman Film Gang are at work on an adaptation of Stanislav Lem’s sci-fi novel The Futurological Congress. The film, says Folman, will be “mostly animated,” and he hopes to double his animation team and turn the movie around in three years, rather than the four years it took to make Waltz with Bashir.

But he’s already decided against using the same tools that animated Waltz with Bashir. “We’re trying to invent something new now,” he says.