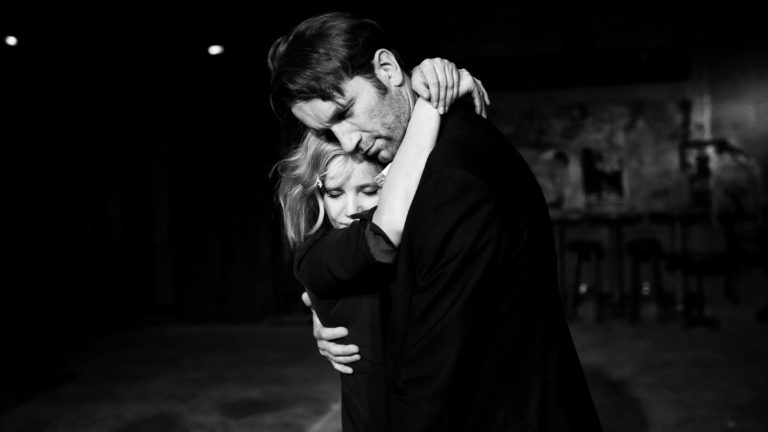 The real horror in Us, director Jordan Peele’s followup to his Oscar-winning and unsettlingly resonant hit Get Out, is the vaporous line between reality and “The Tethered,” shattered mirror images of every human being on earth. The worlds both inhabit in the film are distinct yet intersecting, a liminal space that becomes vivid and terrifying on screen in the hands of the director, actors and crew. The unexpected way Peele tells his story—his steady, saturated images and urbane spaces are the antithesis of the jerky, grainy wildness of The Blair Witch Project—makes for genre-bending watching as we contemplate the existential terror of meeting our own inner monsters gone rogue.

Released in March and on DVD in June, Us and its director are, not surprisingly, enjoying quite a moment this Halloween season. A live experience inspired by the film anchors the annual spookfest at Universal Studios Hollywood’s Halloween Horror Nights and runs through the end of the month. In early October, Peele’s Monkeypaw Productions cut a five-picture, first-look production deal with Universal. And last week, Peele received the John Schlesinger Britannia Award for Excellence in Directing from BAFTA Los Angeles, an honor consistently bestowed on future Oscar nominees and winners including Ava DuVernay, Christopher Nolan, Steve McQueen, Ang Lee and Kathryn Bigelow.

Us cinematographer Michael Gioulakis used Zeiss lenses and the filmic yet precise control of the Alexa Mini and SXT to render the unrelenting reality in each frame after mapping out nearly every sequence via storyboards with Peele. Gioulakis is no stranger to scary cerebral fare: he shot David Robert Mitchell’s breakout horror film It Follows and just wrapped the nine-episode first season of M. Knight Shyamalan’s Apple Original series Servant, premiering Nov. 28. We asked him about the challenges of filming among so much glass and multiple reflective surfaces, especially in near darkness, and how tricky it was to set up and shoot scenes featuring the same set of actors in opposing roles.

StudioDaily: Which was your A camera: the Alexa Mini or the SXT?

Michael Gioulakis: The SXT, but we were flipping back and forth between the two fairly regularly. To me both are the same camera, with the same sensors and codec. The only difference is really in the frame rate. Also, the cards make working with the SXT a little bit easier, in my opinion. What did you appreciate about both cameras’ form factors for this film in particular?

You know I just like the Alexa in general because of its features and color rendition. The Mini came in particularly handy, however, because we ended up using the DJI Ronin and Ronin 2 rigs a lot. The Ronin 2 is essentially a lightweight gimbal, so a good portion of the film we lived on the Ronin 2 with the Mini on the dolly or off a jib. For a lot of our stage stuff we didn’t even have to lay down track in the hallways and classrooms, we would just pretty much ride on the dolly with the Ronin.

Why did you pair them with the Zeiss Primes?

I always like the cleaner, immersive look of the master primes. I usually shoot on the wider side and they are still pretty flat, even when you get pretty wide. There’s very minimal distortion on it and I find that advantageous.

I love the fact that distortions, so typical in horror films, aren’t part of the story. Instead, reflections are a major motif. How difficult, for example, was it to shoot Lupita Nyong’o through that plate glass window at the vacation house at night?

Jordan had the idea to shoot through the window, so we boarded it in prep and we found a location and built the blocking around that. It was somewhat difficult, just in terms of trying to get the lighting just right, but not particularly tricky to do. Did storyboarding help you in other ways, especially since the actors are all playing two versions of themselves often in the same scenes?

Definitely. When I came on to the film Jordan had already started storyboarding and I picked up with him and we continued doing it together during the shoot as well. We ended up storyboarding pretty much the entire film because it was helpful for us creatively to see everything laid out. I really love working that way and I think Jordan really liked working that way, especially being able to see a couple of options on the page and seeing what works best and what felt right. But logistically it seemed necessary given all the big hair and makeup changes, not to mention how the actors had to shift into each different version of their characters. That scheduling factor meant we needed to know who we were seeing at each moment, from the main characters to their alter egos.

How did Peele’s direction help you all through what must have been a very challenging doubling of not just characters but scenes that had to be shot multiple times so the actors could interact with themselves?

Jordan has a pretty unique vision, and the actors were so amazing at every turn. But we were very clear that we were never trying to make a spectacle or a gimmick out of the idea of their being two versions of the same actor in the same frame, so there really are only a handful of shots in the film where they are both on the screen at the same time. Jordan tried to be very careful when those moments were and was very selective. I think that was smart because it was really about just telling the story. This scene in the family room was one of the more emotionally challenging for both the cast and crew, says Gioulakis.
Claudette Barius/Universal Pictures

How tough was it to light a film that mostly takes place at night?

The power goes out at the Wilson’s home fairly early on and stays off for a while, so a good chunk of the film is shot not just at night but in near total darkness. The challenge was trying to find the right kind of light levels and not make it feel like there was any kind of key light on the actor. We wanted to make sure there was a clear motivation to the lighting, so we needed to decide what that motivation is and apply it. I tried not to light the faces too much and rather light the environment. When they are all together for the first time in the family room, however, that was a little bit different and I lit that shot to shot, just because it was such a critical moment. It was always trying to find the right balance between darkness and reading their expressions, which is hard in a lights-off scenario when there’s no logical motivational light source.

The scenes out on the lake are also pretty dark and looked equally tough. Were they?

Yeah, that was pretty challenging. We actually shot that scene during our first week of production, so we started off strong on the water. Again, we tried to simplify as much as possible and we had a lot of discussions on how to do that. I came up with a plan where we had a couple of lighting barges that had some 12 x 20 frames on them and so had some lights pushing through there. We’d turn one off and turn the other one on, depending on which direction we looked. We tried to cheat the directions as much as possible because we only had so many hours of night during each of those days.

Was Winston Duke, in both his roles, in the water or just the stunt double?

Both, but Winston was probably in the water the most!

What was your favorite place to shoot?

The underpass. I think [production designer] Ruth [De Jong] did such an amazing job with the space. Every single direction and every corner looked beautiful. That was my favorite for sure.

There are some very intense moments in this film. Did you find any of them difficult to get through on set?

I think the family room scene was probably the most difficult emotionally, just in terms of watching the actors occupy such different spaces during their doubled performances. But it’s a very emotional scene to begin with. When Lupita first came on set dressed as Red and did her monologue, it was a pretty amazing moment for all of us.